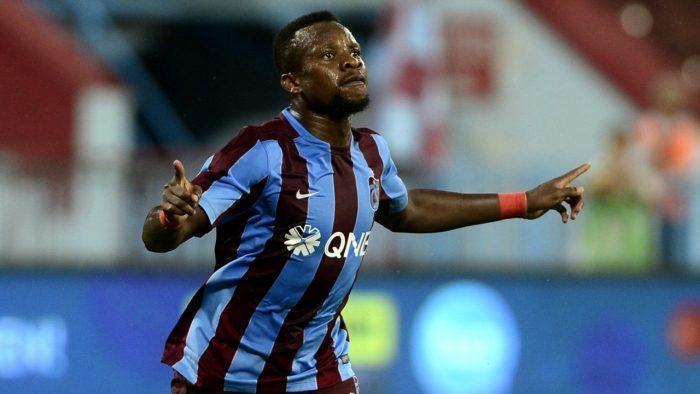 Super Eagles forward Anthony Nwaekeme scored the winning goal for Trabzonspor to pip hosts BB Erzurumspor 1-0 in their Turkish Super Lig clash at the Kazim Karabikir Stadium on Saturday.
The News Agency of Nigeria reports that Nwaekeme netted the winner in the 64th minute to help his side seal all three points in the game.
The goal was the forward’s fifth in his last four games for the club and his eighth in 19 league appearances so far this season.
Erzurumspor also paraded their Nigerian import Emem Eduok for the entire duration of the game.
Also in Turkey, the trio of Chidozie Awaziem, Azubuike Okechukwu and Aminu Umar were all in action for Caykur Rizespor, who defeated hosts Konyaspor 2-0.
Awaziem and Okechukwu featured for 90 minutes, while Umar came in for Moroccan midfielder Aatif Chachechouche 24 minutes from time.
In Saudi Arabia, Ahmed Musa provided an assist in Al Nassr’s 4-0 away win against Al Wahda.
Musa has now failed to score in 10 league outings for Al Nassr, having managed five goals in 18 league appearances for his club.
In Italy, Ola Aina was in action for 90 minutes as Torino fell to a 2-3 home defeat against Bologna.
Aina was however issued a straight red card deep into stoppage time for a rash tackle.
The encounter at Stade Olimpico was Aina’s 25th outing in the campaign for Walter Mazzarri’s men, and he has scored once for the club this season.
Kenneth Omeruo also ended on the losing side as Leganes lost 0-2 at home to Girona in a La Liga clash at the Estadio Municipal de Butarque.
He picked up a yellow card in the 63rd minute of the encounter.
Omeruo, who is on loan at Leganes from Chelsea, has made 22 league appearances for the Spanish clubside.