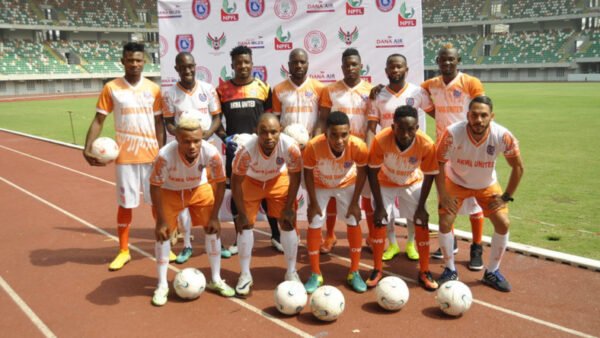 Rangers International Football Club of Enugu on Sunday humbled visiting Adamawa United of Yola 2-0 in a 2019/2020 Nigeria Professional Football League Match Day 22 fixture.
The News Agency of Nigeria reports that Isaac Loute and Israel Abia scored for the home team after several missed chances.
Loute gave Rangers the lead from a free-kick at the edge of the penalty box in the 44th minute.
Abia made it 2-0 for the home team from the penalty kick spot in the 62nd minute after defender Mohammed Jiya had hacked down Chinonso Eziekwe.
Speaking after the match, Rangers’ assistant coach Mangut Mbwas said their players performed well, especially in the second stanza.
Mbwas said: “We are going to work more on our scoring, especially as we missed lots of scoring chances during the match.
“Victory was expected of us and we thank God we were able to deliver after missing several chances.
“The players did well after the interval by closing the visitors down to ensure the win.”
On his part, Adamawa United’s Ibrahim Bariki said he was not in any way disappointed with the result.
Bariki said: “This is the best of us in all the away matches we have been playing and we will keep improving.
“Rangers are a good team, but they overshadowed us with their experience as my players made some costly mistakes which led to the goals.”