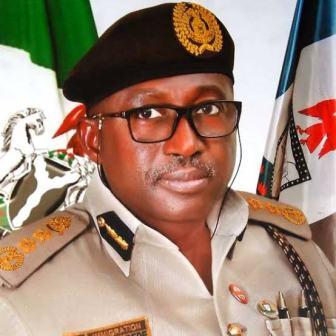 Nigeria, with the affirmative action on the National Policy on Migration with the support of International Organisation for Migration in 2015, made a bold statement and commitment towards harnessing the potentials of the migration sector as one of the steps to rejig the economy. One of the cardinal objectives of the framework of the policy is: “To develop a national migration data system and mechanism which allows access to, utilization of, and sharing of generated migration data among all stakeholders.” As an addendum to that, the policy was also tailored towards provision of “opportunities for direct foreign investment in key areas of the economy for commercial, entrepreneurial and other productive activities”.

Migration globally shapes the economies of nations with direct impacts on both internal and external investments. With Nigeria as one of the key beneficiaries of diasporas remittances, the Nigeria Immigration Service’s dynamic policies over the years have been a major boost facilitating ease of business in that direction.

According to the Nigerians in Diaspora Commission, in 2018, Diasporas remittance to the economy was $11.23 billion while it increased to $17.57 billion in 2019. At the centre of it all, is the NIS and the migration policy. Certainly, the nation cannot fold its arms, being the most populous country in Africa and the largest black nation on earth, while the rest of the globe devise immigration strategies to corner resource.

Thus, working towards answers to the above assertions, the Federal Government set up the Presidential Enabling Business Environment Council (PEBEC) in 2016 with the aim of minimizing the constraints that come with running businesses in the country in order to reposition the economy.

In the same year, the baton of leadership at the Nigerian Immigration Service changed precisely on May 15, 2016, with the appointment of Muhammad Babandede, as the 16th Comptroller General of the agency by President Muhammad Buhari, as the successor to Martin Abeshi. For some passive participants in the nation’s affairs, the appointment was a mere routine exchange of guard, but, thereafter, revelations from the agency had confined such thought to the dustbin.

With the array of activities and the impacts of the NIS on the economy laced with inputs on national migration policy, perhaps Nigeria, despite her challenges, is becoming a toast among the comity of nations as noted by the Journalists International Forum for Migration (JIFORM) with over 200 pool of journalists focusing on migration reportage across the continents.

Checks on the NIS’s history indicated that the institution was extracted from the Nigeria Police Force in 1958 and subsequently became a legal entity on August 1, 1964, following the promulgation by the Nigerian Government through an act of parliament titled Immigration Act Cap 171.

The Immigration Department as it was initially known was first headed by a Chief Federal Immigration Officer and later Director-General with first sets of officers drafted from the Police to enforce laws on immigration matters purposely to restrict movement within and outside the country, border patrol, passport and visa issuance among others in consonance with the Commonwealth nations and citizenship laws.

The Service had since transcended its core mandates to become a force to reckon with in the economy. First the NIS bagged the PEBEC Best Home Indicator Award in December 2017. Today, the agency is the most reformed minded government parastatal in Nigeria as acknowledged with a presidential award from PEBEC this year.

The revolutionary agenda being implemented are unprecedented such that in 2017, as part of a plan to improve the country’s business climate, the Service reviewed the requirements for Nigerian visas to make them more customer-friendly. This eventually led to the launch of the Nigeria Visa Policy 2020 document that had increased visa types from just six to 79.

In addition, machinery was put in place to commence draft and implement a five-year comprehensive border management strategy running from 2019 through 2023.
In preparation for this, the NIS had worked out synergy with the National Identity Management Commission (NIMC) and commenced the Migrant-e registration process to identify both documented and undocumented migrants in Nigeria. The scheme had collated over 255, 000 data of registered foreigners.

These, apart from complementing the national security, provide the basis for a record on cross-border movement, for appropriate enforcement actions for designated individuals at the border and greater confidence of identity for return and other special case processes.
Within the last three years, the NIS has put in place a world-class, fully digitalised, office that integrates all land border movement data into the overall migration database, including linkage with national alert list and with INTERPOL-124/7 databases.

Expressing optimism on the ability of the Nigeria Visa Policy 2020 championed with visa on arrival, an elated President Buhari said during the launch of the document: “I am confident that the Nigeria visa policy 2020 will support the attainment of a globally competitive economy for Nigeria by building on the efforts of the Presidential Enabling Business Environment Council (PEBEC). The policy is expected to improve the business environment, attract Foreign Direct Investment (FDI) and boost tourism without compromising the national security.”

No wonder that the international community adjudged Nigeria as one of 10 most improved economies with a 15-place rise on the World Bank’s 2020 Ease of Doing Business Index. We are now ranked 131st, from 146th last year; and up 39 places since 2016, when PEBEC was established.

All these are pointers to the fact that leadership is very key to the success of any establishment.

In terms of remittance to the national pulse, the agency had recorded increase in revenue collection for the year 2017, 2018 and 2019, by generating N35.72 billion, N39.06 billion and N62.6 billion respectively. Also, foreign revenue collected in Dollars within the same period under review ranged from $27.26m in 2017, $36.91m in 2018 and $41.8m in 2019.
Therefore, when the presidency on its own decided to extend the retirement date for the CGI from 2020 to 2021, many applauded the decision as a welcome development against over zealousness of some desperate officers wanting to shunt the hierarchy order.

Born on November 21, 1963, a graduate of History/Islamic Studies with Master degree in Law Enforcement and Criminal Justice from Ahmadu Bello University, Zaria, Babandede hails from Jigawa State. The widely traveled Chevening Fellow, Leadership Academy for Policing, Bramshill, United Kingdom had undergone a series of training across the continents in diverse areas and professional immigration service anti-crime courses.
The exposure no doubt influenced the construction of Technology Building (a command and control Centre), developed curriculum & teachers guide for Training Institutions, the establishment of Rapid Response Team (RRT) and the establishment of forward-patrol bases, introduction of Daily Dressing Code 7.

The good tiding also include contraction of barracks, construction of Service command building in nearly 36 states, digitalisation of Airport and some land border clearance through the introduction of Migrant Data Analysis System (MIDAS) and Electronic Management System just to mention a few NIS achievements under Babandede’s leadership.

For Nigeria to continue to reap economic benefits accruable in migration and other sectors, the didactic from the NIS experience is that only the best is good enough for the nation in terms of choice of leadership and appointments.
We must all rise to promote merit at all times and focus more on strategies targeted at raising the bar of progress especially by tapping from the huge resources in the immigration world to lift the nation.

. Abayomi, a migration advocate-journalist and the President of Journalists International Forum for Migration, writes from Lagos, Nigeria.