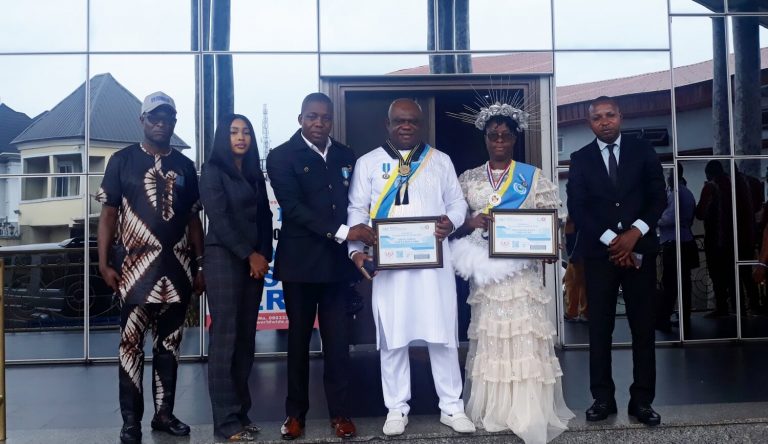 The International Human Rights Commission on Thursday conferred its prestigious Global Gold Medal Award on Omega Power Ministries General Overseer and Founder, Apostle Chibuzor Chinyere.He becomes the first black man and single individual in the world to be conferred with the award, according to the IHRC.The IHRC High Commissioner for African Diplomatic Headquarters, Dr. Friday Sani, conferred the award on Chinyere at a short ceremony in Port Harcourt, Rivers State.Sani said the award was in recognition of Chinyere’s numerous humanitarian services, particularly his intervention to the family of late Deborah Yakubu, who was killed recently in Sokoto.He said: “Aside being the first black man and single individual to be honoured with this Global Gold Medal Award, IHRC is happy to identify with Apostle Chinyere.“We are not surprised over this award considering your (Chinyere) numerous services to humanity for so many years now.“To this end, the award was directed and approved by the World Headquarters of IHRC and recognised by the United Nations, European Union, among others.”Sani said the award automatically admitted the OPM general overseer into the International Police Cooperation – the largest network of security in the world.He said: “We have a dossier of what Apostle Chinyere has done in serving humanity. But the exceptional one that attracted IHRC was his intervention made to the family of Deborah Yakubu.“After Yakubu was murdered for no just cause, Chibuzor brought her family to Port Harcourt, accommodated them; gave her parents jobs and awarded scholarships to her siblings.“This is an exceptional display of a Christian leader and the kind of man needed to make Africa a good place.”The IHRC commissioner urged other political religious and other leaders to emulate the OPM founder and give back to humanity.The News Agency of Nigeria reports that the IHRC also bestowed the Global Bronze Medal Award on his wife, Nkechi Chinyere, for supporting her husband in his philanthropic works.Receiving the award, Chinyere said the humanitarian services were sponsored through the tithe and offerings from members of OPM.He said he had passion and love for the downtrodden in society, especially as God encourages man to love his neighbour.He said: “You’ve not lived a good life unless you touch the life of someone positively.“The only way you can touch the heart of God is to touch your fellow human.“A lot of people are suffering greatly in Nigeria today, and hence, it is important for people to provide succour to the suffering masses.“Consequently, we have built free hospitals; operated over 20 free schools, given free accommodations and awarded scholarships to thousands of students to study in both home and abroad.”According to him, the humanitarian services are for the benefits of the less privileged, irrespective of their tribes and religion.