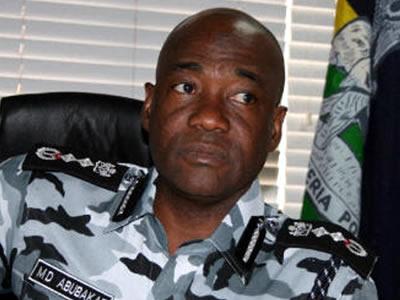 The incident happened on August 30, 2012 at Epe in Lagos State.
The suspect, Abiodun Otaoroju, allegedly killed his son, Kazeem, with a perfume.
Otaoroju blamed the devil for his dastardly act.
Otaoroju was arrested last month by officers attached to the Epe Police Division, after the mother of the child, Ronke, reported the incident to the police.
Ronke is not married to Otaoroju.
Otaoroju, however, blamed the devil for the death of his son.
He said a mystical force came over him, which made him to kill his son.
Narrating how he killed his son, he said: “I met Ronke in 2011.
“I am a mechanic while she is a fashion designer.
“We fell in love and she got pregnant.
“Though I have a wife with three children, I still wanted to marry Ronke.
“On August 30th, during one of my visits, I sent Ronke to go and buy  bread.
“”She left the baby with me and went out.
“After Ronke left, I felt a strange voice urging me to kill my child.
“I tried to resist but the force was too strong.
“I went outside and bought a liquid substance known as Bint El Sudan, a kind of perfume, which Hausa people use.
“I took the substance, opened Kazeem’s mouth and poured it into his mouth.
“I don’t know why I did that.”
In her statement to the police, Ronke said by the time she got back to the house, Kazeem was already gasping for breathe and foaming in the mouth and nose
The dying child was rushed to the Epe General Hospital where he was confirmed dead.
Ronke, however, became suspicious when Otaoroju could not tell her what happened to their child.
She subsequently reported the incident at the Epe Police Station and Otaoroju was arrested.
The suspect was transferred to the State Criminal Investigation Department, Panti, Yaba where he confessed to the crime.
He said: “This is just the devil that pushed me to do this to my son.
“I love Kazeem and Ronke.
“I don’t know what came over me.
“It was after I gave him the poison that I got back to my senses.
“I do not have any quarrel with Ronke.
“It was after the murder that my eyes opened.
“It was the devil’s handiwork and I regret my action.”