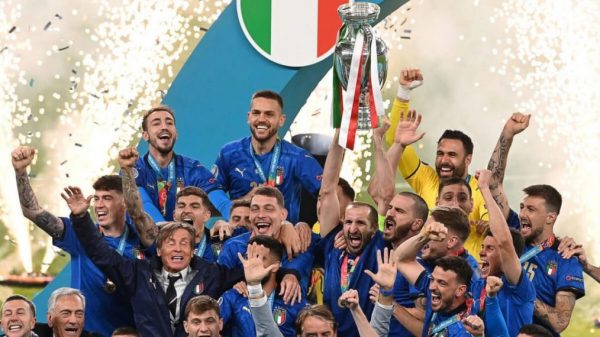 England fans, hoping the team could defy decades of disappointment and win a major international football tournament for the first time since 1966, created mayhem outside the iconic Wembley Stadium on July 11 after Italy had won the Euro 2020 final via penalties.

The English supporters reacted after Italy’s victory at the European Championship in a 3-2 penalty shootout, after a match that ended 1-1 after extra time.

They attacked the Italian fans outside the stadium, viral video clips showed.

A short video, circulating on the Internet, shows English fans hitting their Italian counterparts – kicking and punching outside the stadium.

Earlier, before the match began, thousands of fans without tickets descended on Wembley Stadium, some scrambling up trees and traffic lights to fly the England flag.

There were chaotic scenes as security staff and police scuffled with hundreds who tried to storm barriers and enter the stadium, reported Associated Press.

The London Metropolitan Police admitted that a small number of ticketless fans had entered the 90,000-seat stadium, where capacity was supposed to be limited to a pandemic-restricted 67,000.

The Metropolitan Police said 49 people had been arrested and 19 of its officers were injured after confronting volatile crowds near Wembley Stadium throughout the day.

This prompted the English Football Association to issue a statement condemning the language used against the players.

Bukayo Saka, at 19, one of the youngest players on the England squad, missed the penalty that gave the title to Italy and denied England its first international trophy since the 1966 World Cup.

It was England’s third straight failure from the penalty spot in the shootout, with Marcus Rashford and Jadon Sancho also missing.

The FA said in a statement it was “appalled by the online racism that has been aimed at some of our England players on social media.

“We could not be clearer that anyone behind such disgusting behaviour is not welcome in following the team. We will do all we can to support the players affected while urging the toughest punishments possible for anyone responsible.”

The England team also released a statement condemning the abuse directed at its players on social media.

“We’re disgusted that some of our squad – who have given everything for the shirt this summer – have been subjected to discriminatory abuse online after tonight’s game,” the team tweeted, adding that it stands with its players.

British police said they would investigate the posts.