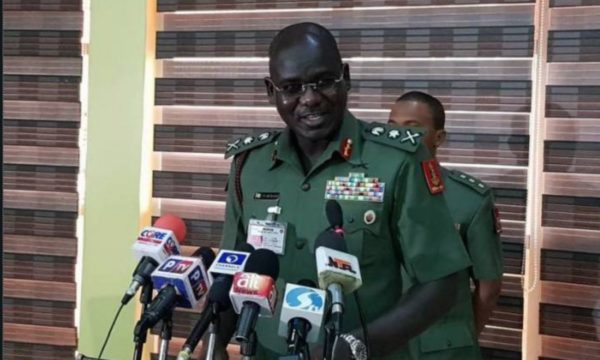 The Chief of Army Staff, Lieutenant General Tukur Buratai, has been awarded the Daily Asset Newspapers 2020 Man Of the Year in security category.
The Acting Director, Army Public Relations, Colonel Sagir Musa, in a statement on Friday in Abuja said the award was in recognition of his contributions to the fight against banditry, insurgency and terrorism in Nigeria.
Musa said the award ceremony, which took place in Abuja on Friday, had eminent personalities from all works of life in attendance.
He disclosed that the President of the Senate, Ahmed Lawan, represented by Senator Bello Mandiya (APC-Katsina South), with Senator Gabriel Suswan as the Chairman of the occasion, and representative of the Governor Samuel Ortom of Benue, among others, witnessed the event.
According to him, the attendees in their good will messages were full of praises for Buratai for his dedication and commitment to ensuring peace and security in Nigeria.
Musa said: “They also commended him for transforming the Nigerian Army to one of the very best on the African continent.
“The award was received on behalf of the COAS by the Director Civil Military Affairs, Department of Civil-Military Affairs, Army Headquarters, Abuja, Brigadier General T.O. Olowomeye.”