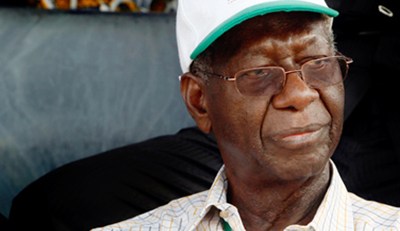 The Chairman, Board of Trustees of the Peoples Democratic Party, Chief Tony Anenih, on Sunday night expressed his fear of the opposition parties’ merger before chiefs of the ruling party.
Anenih told the governors, federal lawmakers and state chairmen of the PDP from the South-South geopolitical zone, in Asaba, Delta State, that the opposition political parties congregating under the All Progressives Congress banner might be a  threat to the PDP hegemony.
“We must not live under the illusion that our party is invulnerable. Although, the existing opposition parties are still too small, fragile and sectional, we must not ignore the possibility that a merger of these parties may constitute a threat to our current dominance of the political terrain,” Anenih told his party men.
The APC, an initiative of the Action Congress of Nigeria, Congress for Progressive Change, All Nigeria Peoples Party and a faction of the All Progressives Grand Alliance, has the avowed mission to dislodge the PDP from power come 2015.
Before now, the Chairman of PDP, Bamanga Tukur, had derided the merger, saying selfish ambition would create division among the merging parties.
The PDP BoT chairman also said that the opposition parties had hijacked the Nigerian Governors’ Forum hence the need for party members to rally round the PDP Governors’ Forum chaired by the Akwa Ibom State Governor Godswill Akpabio.
He told the gathering, “We must not labour under the illusion that we can be spectators in the bold and necessary drama of national reconstruction, or, worse still, align with those who seek power for its own sake rather than for the good of our people.
“We, therefore, have a strategic obligation to put our house in order so as to sustain the peace which we have enjoyed in the last 14 years.
“We must always be conscious that if the PDP becomes fragmented as a result of the inordinate ambitions of a few members, our country, our democracy and our people will suffer.
“We must, therefore, subsume our ambitions under the greater good of our party and our country.
“The proposed merger of four political parties under the umbrella of the All Progressives Congress (APC) appears to be a house built on sand, which is likely to collapse with the first rain. Speaking seriously, however, we cannot afford to be complacent. We must expect any eventualities and prepare to overcome them.”
He deplored the activities of the Nigerian Governors’ Forum which he said had portrayed itself as an anti-Federal Government lobby group.
This, he said, was “in contradistinction to its avowed mission statement of ‘providing a common platform for synergy, collaboration among interests’ or serving as a bi-partisan lobby group which fosters, promotes and sustains democratic ethos, good governance in Nigeria, Africa and beyond.”
He said, “Indeed, the general perception is that the NGF has become a formidable group of power wielders, seeking to control governments at all levels, including the Federal Government.
“What is now beyond doubt is that the NGF has been hijacked by opposition governors and is no longer promoting the interest of the PDP.
“It is for this reason that I fully endorse the formation of the PDP Governors Forum.”
The BoT chairman also drew attention to what he said was “a well-oiled wheel of insidious media propaganda which has been tirelessly churning out sinister information about the Jonathan Administration for the purpose of destabilising (and eventually replacing) his government.
“Unfortunately, some of these political enemies have PDP members as accomplices. What the anti-Jonathan forces are doing is to create tension in a desperate bid to unsettle and disrupt the administration.”
Anenih equally proposed what he said was a rancour-free system of presidential and governorship nominations.
He said, “Our party primaries have, over the years, been the most serious sources of rancour and disunity in our ranks.
“Almost two years are devoted to pre-election processes for political offices and another two in managing post-primaries/election bitterness and disunity.
“More pernicious is the fact that we invest so much resources and energy fighting ourselves in the primaries that should have gone into the larger battle against our political rivals.
“We cannot continue this tradition of internal warfare. We must not live under the illusion that we can fight ourselves to the finish and hope that we can continue to have enough energy left to win elections.”
He added, “We must (therefore) evolve a new system of selecting our flag-bearers at the presidential and governorship levels that would preserve our unity and reserve our energy and resources for the greater battle for political power.
“We must seriously consider this in order to avoid frictions and acrimony in the overall interest of our party and the nation.”
He said at the meeting that the persistent negative profiling of the administration of Jonathan had been a major issue which had been of concern to him.
Anenih noted that “it is true that some governors have complaints against the leadership of the party; however, such complaints are not sufficient to warrant any rebellion as speculated.
“There have also been some complaints against the governors. In any case, the problems raised are not insurmountable as, indeed, they are already being addressed by the leadership of the party.”
He appealed to the party leaders in the zone not to lose sight of those challenges.
He accused the opposition of being behind widespread rumours such as, the Presidency using EFCC to harass governors who refuse to support Jonathan’s alleged interest in contesting for the Presidency in 2015; alleged massive acts of corruption against certain government functionaries; plans by some PDP governors to defect to opposition parties; and death or hospitalisation of public officials, including governors, among others.
Meanwhile, some governors from the South-South and South-East geopolitical zones at a meeting in Asaba on Sunday expressed confidence in the President and commended efforts by his administration to combat insecurity and other challenges confronting the country.
The Punch.