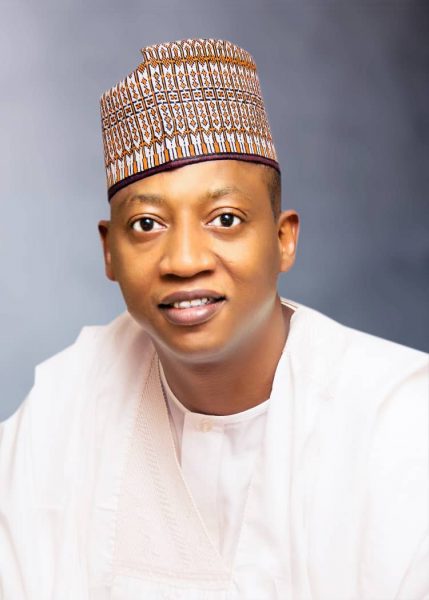 Aliyu Haidar Abubakar, the son of the President of the Court of Appeal, Justice Zainab Bulkachuwa, has submitted the Expression of Interest and Nomination forms to take over from Governor Ibrahim Dankwambo in 2019 as a frontline gubernatorial aspirant on the platform of the ruling All Progressives Congress in Gombe State.
The first son of the first female President of the Court of Appeal boasted that his youthful age, which translates into being imbued with fresh leadership ideas, stands him out among the sea of governorship aspirants in the state.
Abubakar stated this in a chat with newsmen after he submitted his Nomination Form to the National Secretariat of the APC in Abuja.
The Abuja-based businessman, who had working experiences in the public and private sectors of the economy, is a youth activist and holds the chieftaincy title of Talban Nafada.
The governorship hopeful noted that his desire to liberate Gombe State from the clutches of economic underdevelopment and backwardness is the rationale behind his intention to vie for the governorship office.
He said: “The tragic and appalling level of governance in Gombe State demands youthful leadership greatly imbued with charisma, foresight and vision, which my candidacy abundantly have in stock.
“My aspiration and fervent dream to pilot the affairs of the state and take it to the promised land is altruistic and noble.
“This is the time to change the Gombe narrative for good.
“It’s time the state takes its rightful position in the comity of states across the federation.”
Abubakar promised to change the status quo and depart from the business as usual style of leadership.
He pledged to diversify the state’s economy, noting that allocations accruing to the state will be judiciously utilised to transform Gombe into a modern state.
He said: “There is the need for a visionary youth like me to take up the gauntlet, if Gombe State will not continue to remain backward.
“It is sad that we are still at a crossroads, while our sister states have become a model for accelerated growth and progress in all facets of human endeavours.
“A new dawn awaits Gombe if I am elected next year.
“I will definitely raise the bar of exemplary, accountable and service leadership.”
Abubakar explained that he had consulted widely with relevant stakeholders before signifying his interest for the highest political office in the state.
He debunked the information making rounds that he was coaxed by some vested interests and overbearing elites to seek the governorship post.
Born in 1973 and with a bachelor’s degree in business administration from the Bayero University Kano, Abubakar is a humble, easy going philanthropist with business interests in property development, construction, agriculture and livestock.
He is a strong advocate for youths and women empowerments and No-too-young-to-run campaign.