UCL: Inter bow out after being held at home by PSV Eindhoven 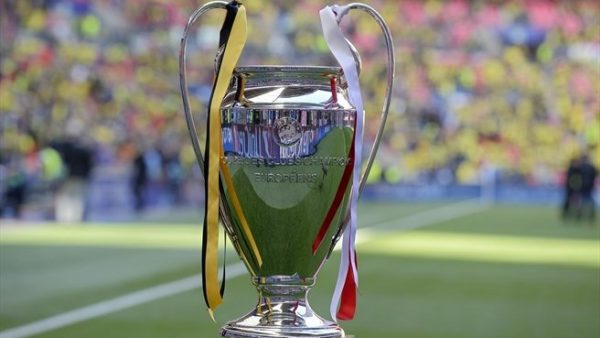 Share
Facebook Twitter LinkedIn Pinterest Email
Inter Milan were knocked out of the UEFA Champions League after they could only manage a 1-1 draw at home to Group B’s bottom club PSV Eindhoven on Tuesday.
They thus finished third behind Tottenham Hotspur.
Inter would have qualified with a win but, on a fraught night at San Siro, finished level on eight points with Tottenham.
Liverpool squeezed through on their head-to-head record with the Italians after drawing 1-1 away to FC Barcelona.
PSV, with only one point from their first five games, took a shock lead in the 13th minute when Hirving Lozano headed home after Kwadwo Asamoah lost possession in defence.
The visitors then survived incessant Inter pressure until Mauro Icardi headed in from Matteo Politano’s cross in the 73rd minute.
Inter were twice close to snatching a win in stoppage time.
The first was when Icardi had the ball taken off his toe by a brilliant last-ditch tackle and then when substitute Lautaro Martinez headed over Ivan Perisic’s cross from an unmarked position.
Inter made a whirlwind start and, after Perisic saw his header pushed onto the post by Jeroen Zoet, got a huge boost when Barca took an early lead in the other game.
But the celebrations were short-lived as minutes later Asamoah tried to turn past Steven Bergwijn.
He was dispossessed by the Eindhoven forward, who crossed to the far post where Lozano headed in.
The Ghanaian’s nightmare continued when he slid to break up an Eindhoven attack.
But he succeeded only in setting up an opening for Luuk de Jong whose shot was blocked by Inter goalkeeper Samir Handanovic.
Icardi headed wide from a Perisic cross and again from the tricky Matteo Politano as Inter flung a series of balls into the Eindhoven area without success.
Inter continued to press desperately after the break, and Icardi had a shot brilliantly turned around the post by Zoet, who then blocked a low effort from Politano.
They eventually levelled when Politano floated a long cross to the far post, where Icardi got free of Trent Sainsbury to squeeze his header past Zoet.
At that point, Inter were heading through to the next round.
But their dreams were crushed late in the game when Tottenham equalised in Barcelona, silencing San Siro.
Reuters/NAN.
FC Barcelona Inter Milan PSV Eindhoven Tottenham Hotspur UEFA Champions League
Share. Facebook Twitter Pinterest LinkedIn Tumblr Email