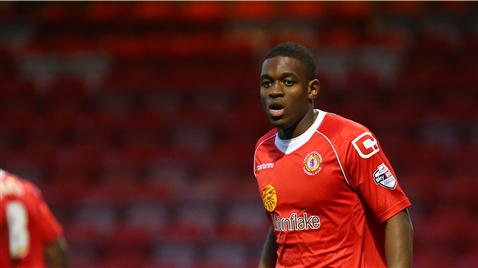 Crewe Alexandra’s on-loan striker, Uche Ikpeazu, is doubtful for Wednesday night’s re-arranged fixture with Stevenage.
The Watford teenager has missed the club’s last two games with an ankle injury.
Ikpeazu picked up the injury while scoring two goals on his full debut against Bradford City.
Steve Davis has revealed that the injury is improving all the time and Ikpeazu does have an outside chance of making the trip South.
The Alex boss said: “Uche’s ankle is still sore a little bit but that is improving. He has also had a dead leg but slowly that has got better.
“If he is going to be for fit for Stevenage? We are still not 100 per cent sure. I would say he is still touch and go, if he is going to be fit enough to travel.”