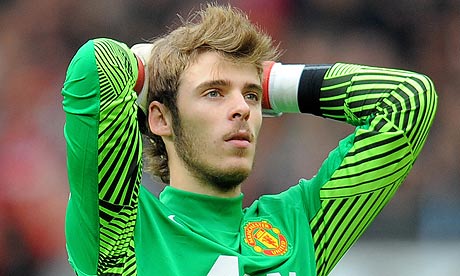 Sunderland took another giant stride towards Premier League safety with a 1-0 victory over beleaguered champions, Manchester United, at Old Trafford.
The Black Cats’ success, which is United’s seventh home league loss this term, moves Gus Poyet’s men three points clear of Norwich, with a superior goal difference.
Fabio Borini struck the crossbar with an excellent curled effort from just inside the area, which left David de Gea high and dry.
Vito Mannone got down well in the early exchanges to deny a Patrice Evra header from point-blank range.
The only goal came after 30 minutes when Connor Wickham was allowed to cross from near the corner flag by Darren Fletcher and Seb Larsson ran unchecked beyond Michael Carrick to fire beyond David de Gea from 12 yards.
Robin van Persie was thrown on in the second period to make his first appearance since the March 19 win over Olympiakos, but it was Sunderland who went close to making it 2-0 when fellow sub, Emanuele Giaccherini, hit the post from Jozy Altidore’s low cross, with Jack Colback firing the follow-up into the side-netting.
With time running out and United’s regular attacks held up by the Sunderland defence, the visitors were again inches away from doubling their lead when Fabio Borini beat De Gea with a curling shot only to see it come back off the face of the crossbar.