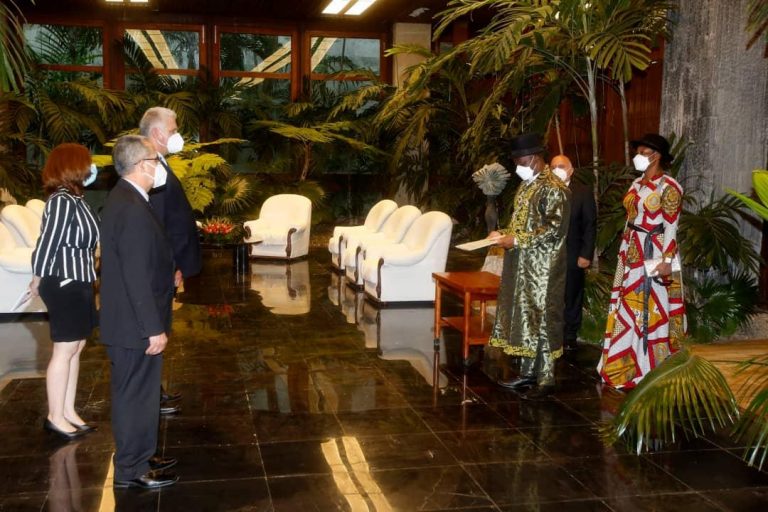 Nigeria’s Ambassador to Cuba, Benaoyagha Okoyen, has presented his Letter of Credence to the President of the Republic of Cuba, Miguel Díaz-Canel, as Ambassador Extraordinary and Plenipotentiary of the Federal Republic of Nigeria to the Caribbean nation.

Okoyen, while presenting his credentials to the Cuban president, extended President Muhammadu Buhari’s commitment to work with Cuba as a very strong partner in the two regions of Africa and the Caribbean.

The envoy, in a statement, said both discussed topics of common interest in the fields of science, medicine, pharmaceuticals, biotechnology, education, culture and sports.

Okoyen expressed Nigeria’s desire to deepen ties with Cuba for mutual benefit, citing Nigeria as the most influential and populous country in Africa.

He particularly told the Cuban president that he had the mandate of president Buhari to work on some strategic areas with Cuba, adding that he will immediately identify and establish links with the relevant institutions in that regard.

The envoy said the meeting also discussed issues of international interest, especially the battle both countries were waging against COVID-19, and commended Cuba for its deployment of brigades of healthcare professionals to over 60 countries.

He said he had the Nigerian Government’s mandate to work out a partnership with Cuba on vaccines’ production in a bid to making Nigeria the manufacturing hub of vaccines in Africa, especially COVID-19 vaccines.

Okoyen said the areas of the partnership, to be explored as it related to COVID-19, would also include the production and distribution of medical equipment, personal protection equipment and medicines.

He emphasised the need for continuous efforts towards enhancing and deepening existing relations between the scientific institutions of the two brotherly countries.

As a matter of topmost priority, Okoyen stated that he would continuously liaise and visit relevant Cuban institutions with a view to encouraging them to take advantage of the enormous investment opportunities in Nigeria, being Africa’s major investment hub.

He also pledged Nigeria’s commitment to work with Cuba as strong partners in the African and Caribbean regions, and recounted the important roles Nigeria continued to play in Africa.

Responding, President Díaz-Canel, while congratulating Okoyen on his appointment, welcomed him to Cuba and extended warm greetings to President Buhari.

Diaz-Canel recounted the bilateral history of the two countries and asked for continuous support in that direction.

He disclosed that the presentation of the credentials came at an important time as it coincided with a day that the country’s Foreign Affairs minister was presenting another set of resolutions at the United Nations against the US embargo on Cuba.

The resolution called for an end to what Cuba termed ‘genocidal blockade’ that was causing serious limitations to the Cuban government and people.

He thanked Nigeria for its fraternal support over the years and counted on the continued united support of the Africa Union against the U.S embargo.

The presentation of his Letter of Credence marked Okoyen’s assumption of duty to carry out formal diplomatic activities as Nigeria’s ambassador to the Caribbean country.