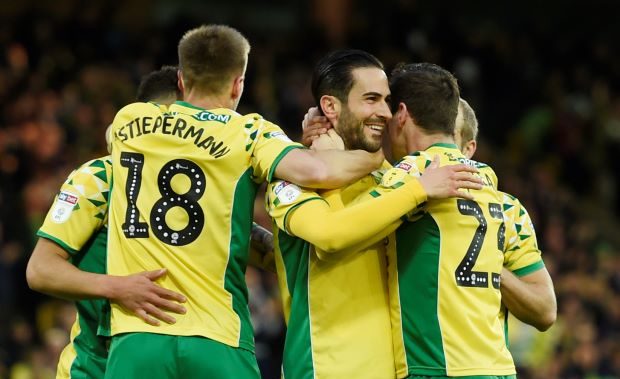 Second-half goals from Grant Hanley and Josip Drmic sent Norwich into the FA Cup fifth round for the first time in eight years with a 2-1 win at Burnley.
Hanley nodded home the Canaries’ opener from a Mario Vrancic free-kick in the 53rd minute and Drmic struck the second four minutes later after Joe Hart palmed Lukas Rupp’s attempted lob into his path.
Erik Pieters gave Burnley hope with a 72nd minute drive but there was to be no grandstand finish from Sean Dyche’s men as the hangover from their midweek win at Manchester United began to kick in.
Norwich had clattered the hosts with good chances in a lively first period which included a golden opportunity for Drmic to mark his full debut with a goal after just seven seconds.
Drmic was played clean through straight from kick-off only to drag his shot wide of target, setting the tone for a remarkably lively first period in which each side could count at least five clear-cut chances.
Canaries keeper Ralf Fahrmann blocked a Jay Rodriguez effort after five minutes as the hosts, featuring five changes from their midweek win at Manchester United, shrugged off their early scare.
Fahrmann had to be alert again in the 13th minute to tip a Robbie Brady effort round the post, but two minutes later the action swung back to the other end where Sam Byram’s strike was blocked on the line by James Tarkowski.
Oriel Hernandez blasted a long-range effort which was well saved by Hart, while the immense Tarkowski rescued his side again in the 23rd minute with a goal-saving challenge on Vrancic as he shaped to shoot.
As an attractively open affair continued to develop, Hart saved another long-range drive from Rupp, before Tarkowski headed against the bar from a Burnley corner.
Brady found space in the box but pulled his low shot wide, before the energetic Drmic fittingly had the final chance of the half when he dragged his effort across the face of goal.
Norwich finally converted one of their many chances eight minutes into the second half when Hanley nodded in a Vrancic free-kick from point-blank range.
And the Canaries doubled their lead four minutes later when Hart palmed an attempted lob from Rupp into the path of Drmic, who could hardly miss from six yards.
Norwich could have extended their lead through Marco Stiepermann before Pieters’ 72nd minute drive gave the home side renewed hope of salvaging at least a replay.
But no more clear-cut chances were to fall the hosts’ way and instead it was Teemu Pukki, on as a second half substitute, who almost put the gloss on his side’s ticket to the fifth round.