Joke Silva: How I combine work, motherhood and being a wife

Joke Silva is regarded as the grandmother of the Nigerian film industry. Silva is an award winning actress and a role model, with a successful and influential career spanning over three decades. She is the wife of veteran actor, Olu Jacobs and is renowned for the memorable roles she has played both off and on screen. In this engaging interview recently, the veteran actress bares her mind on a number of issues affecting the industry and her career. She says while doing what she knows how to do best, she does not compromise on her standard when it comes to acting in Nollywood movies. She also explains why she has not been featuring in Yoruba movies as well as why most younger actresses look up to her. Excerpts:

You are a role model to many young women. What do you think could make them look up to you?
First  and foremost, I want to thank God for establishing the work of one’s hands. I think one has been blessed to have longevity in the movie industry. Everybody wants fullness of life and longevity in their chosen professions. That’s one of the reasons these young actresses see me as their role model. There is the longevity and the passion that one has for one’s work in addition to having a family life and a career at the same time.

In your own assessment, how would you rate what they call the New Nollywood?
I’m not a supporter of this idea of the ‘new and old Nollywood.’ I look at the entire film industry as one, which has been recording steady growth. That’s the way I see the industry. It’s really sad because I think we have one of the oldest entertainment traditions in the whole world: theatre. We have  been making films way back in the 50s. And for us to celebrate 20 years of Nigerian film industry last year, I personally believe we are underrating ourselves. Unfortunately, people like us whom they consider as old-fashioned are not in control of the affairs of the industry. There is the need to sound a note of caution that we must jettison our history so that posterity will not judge us. 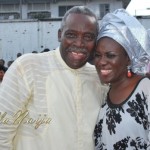 Are you agreeing with Kunle Afolayan when he wrote on his Facebook page last year that celebrating Nollywood at 20 is celebrating 20 years of producing low quality films?
I’m not sure if I would support that opinion. This is because I know that within the last 20 years, Nollywood has churned out some absolutely amazing films. I wouldn’t support that kind of assessment of the industry. But I do know that a lot of Tunde Kelani’s films fall within and before these years. So, you can’t authoritatively claim that Tunde Kelani’s works are not bar raisers. Even though there is an ongoing argument that TK does not see himself as a Nollywood practitioner. But I think we need to understand what the word Nollywood stands for. For me, Nollywood is the entire Nigerian film industry. It got branded with the name and it has been in existence for much longer than the name.

Would you say you began your career in commercials or on stage?
I started on stage definitely.

What’s your preference: stage or screen?
I don’t prefer one to the other. I enjoy working in both genres. For me, both of them are part of my ways of expressing myself. I discovered that if I’m being pigeonholed into either of the two, I don’t feel I’m expressing my unique creativity in both mediums.

But frankly, where lies your strength?
I’m strong in both genres. It’s just that sometimes, people expect to see me more often on screen than they do on stage. My strength lies in both genres.

These days, you are rarely seen on screen. What happened?
Yes, I had a project I was doing. It  took me away for a while, but I’m working now.

Meaning that you have staged a comeback to Nollywood?
I have never left the industry. In fact, I have been doing a lot of works in the theatre and also starring in some films in the last couple of months.

Is it a case of being selective?
Not particularly. Once in a while, I do get scripts that I would reject outrightly. In the past couple of days, I have said yes to a couple of scripts. But I also said no to one script simply because I didn’t agree with the story line of the movie.

Unfortunately, you have not ventured into producing your own movies. Why?
We did. I produced the film called ‘King Maker’ with my husband about 10 years ago. We were part of a new distribution network that was to kick off then. But it never actually flew as we were hoping it would. As a result, we decided that we wouldn’t go into film production unless there is a proper distribution platform. It would be a risk getting investors to sponsor a production where there is no open distribution platform. Though, there are distribution platforms, these platforms are not open as you cannot monitor your sales and things like that. So, it’s a bit difficult for an investor since he cannot monitor the sales. But right now, things are looking a bit better than the previous years. I think we will consider the idea of going into film production again. I know that we did a lot of theatrical productions in the 80s.

Judging from your roles in movies, you are not far from being a feminist. Isn’t that?
Yes, I think that’s very important. God created the universe with the two opposite sexes. He didn’t create the woman to be subordinate to the man. He created her to be a helpmate to the man. It’s amazing that you raised this issue because one of the scripts I rejected recently was a script in which not even one female character was positive. All of them were negative characters. I said to the producer: I’m sorry, I wouldn’t want to be part of the film. I like to see ‘flood characters’. Let’s see how human beings surmount the challenges of life. I don’t want to see angels and saints in the sense that they can do no wrong. We have our redeeming qualities. Let’s celebrate the human being, both male and female.

Did you set out in life to become an actress?
As a child, I wanted to be everything. I wanted to be a nurse, a doctor, a lawyer, a teacher. I wanted to be everything under the sun. But there came a crucial time in my life. That was in my late teens when I needed to understand what direction I was going. I was brought up to ask the Lord some salient questions whenever I’m at a crossroads. So, I went to the Lord with my questions concerning what direction I should follow in life. When I was studying for my ‘A’ Level Certificate, I got offers from the universities to study medicine. I also got offers to study Theatre Arts if I passed my A’ Level examinations. So, it was a bit confusing for me. I took it to the Lord in prayers. He was faithful as I knew exactly where He wanted me to be and I haven’t moved away from that path.

Were your parents surprised that you ended up as an actress?
I’m not sure that my parents thought I would be an actress. But they knew it was a talent I had and so they encouraged it. That I became an actress was no surprise to anybody who knew me when I was younger.

Can you remember the film that brought you into the limelight?
They were two films because at that time. There were two distinct industries. There was the Yoruba film industry and there was the home video sector for the English viewing audience. It was ‘Violated’ co-produced by Amaka Igwe and Ego Boyo that brought me into the limelight. And for the Yoruba audience, it was ‘Owulorojo’ by SJ Productions.

Ladies sexually harass me because of my big boobs — Nigerian actress

How do you combine your duty as a mother, wife and an actress?
One, I have had very good role models. I think that’s a key and my first role model was my mum. She was married to the same man all her life, until my father died. That’s over 40 years of marriage they had. Also, my other mentors were Chief (Mrs.) Olaoye, Mrs. Oyin Oladapo, Mrs. Laoye and my mother’s sister, Mrs. Busola Olumide. All these people juggled being wives, being mothers and being professionals. One of the things I learnt is to make time for the family. Your career cannot supersede the family. The family always comes first in everything I’m doing. There is what is called prioritising. What needs attention at a particular point. Is it work, family or your husband? They rarely do need attention at the same time, thank God. So you give attention to whatever needs attention at whatever time.

Ladies sexually harass me because of my big boobs — Nigerian actress

Another Nollywood veteran actor is dead