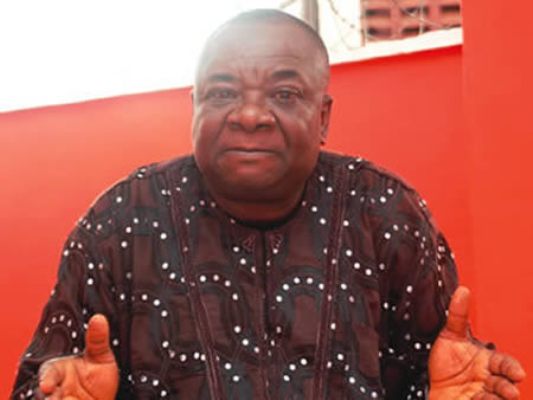 A group, the Police Campaign Against Cultism and Other Vices (POCACOV), has celebrated veteran comedian, Chief Chika Okpala, popularly known as Chief Zebrudaya (ZB) alias 4.30, for using his craft to promote unity in the country.

Chief Okpala, who is also a National Ambassador of POCACOV, turned 71 on June 10.

The national coordinator of POCACOV, CSP Ebere Amaraizu, told the News Agency of Nigeria in Enugu on Friday that Okpala was worth celebrating at 71 for his contribution in using his comedy craft for positive social engineering.

“We at POCACOV with our numerous stakeholders join others to felicitate the TV comedy series mogul of the famous ‘New Masquerade,’ Chief Zebrudaya.

“POCACOV wishes him continual health of mind and body and more inputs to the society,” Amaraizu said.

According to him, Chief ZB, as he is fondly called, used his comic attribute to unite people, create peace and above all remain a shining example for the youths.

“ZB’s comedy craft and disciplined lifestyle have been a great motivation to young minds on self-discovery and strategic leadership direction going by his comedy history lasting for five decades.

“He has played an immense role in the propagation of the message of peace and love from POCACOV and for the young minds to see the positive potential in them and to make use of it.

“We in POCACOV enjoin young minds to tap into the legacies of Chief Zebrudaya by remaining law-abiding by saying no to cultism and other vices,” he said.

Ishkimish, a strategically crucial district for both the Taliban and the government, fell to the militants after tough clashes late on Thursday, local council members Mir Ahmad Qasim, Kiramatullah and Wafiullah Rahmani said.

After hours of fighting, the security forces were forced to leave the district due to lack of ammunition and air support, the officials said.

The fighting over control of the territory had also left a number of security forces dead and wounded, but an exact number was yet unknown, they said.

According to the councilors, the district is strategically important as it connects four more districts in the province and Taliban militants can now easily threaten neighbouring districts.

In the meantime, the Taliban has also been attacking parts of Bangi, another district in the province, since Thursday, the officials said.

The militants have seen a string of gains in the country recently. Since the beginning of the official withdrawal of the United States and other NATO troops in Afghanistan on May 1, at least 15 districts have fallen to the Taliban.

Afghanistan has 34 provinces and around 400 districts.

District centres serve as secondary-level administrative units, one level below the provinces.

According to a UN report, the Taliban were able to capture five districts in the past year, four of which were recaptured by the government within several days.

The Pentagon is now considering seeking authorisation to carry out airstrikes to support Afghan security forces if Kabul or another major city was in danger of falling to the Taliban, according a New York Times report.

The Chairman House Committee on Youth Development, Mr Yemi Adaramodu, has given assurance that the National Youth Service Corps (NYSC) scheme would not be scrapped.

Adaramodu gave the assurance at the unveiling of nine books on NYSC and a maiden NYSC film to commemorate the 48th anniversary of the scheme in Abuja on Thursday.

He said that sponsoring a bill for scraping the scheme should not rattle the agency because any member has the right to sponsor bill at the National Assembly.

“But the Speaker, the rest of us, the leadership of the House believe in the scheme and the scheme has come to stay in Nigeria.

“So, the scheme is going nowhere; nobody is scrapping it.

“Mr Speaker even said that I should felicitate the director-general and his team for this task; and that he is very interested in getting the books,” Adaramodu said.

Professor Okpeh Okpeh, President, Historical Society of Nigeria, while reviewing the books, said that he particularly liked the one titled ‘NYSC (1973-2020): Emergence, Growth and Development’.

He said that this was because even with the poor reading culture of Nigerians, the pictures that accompanied the write-up were sure to attract people and encourage them to read.

Okpeh said that the scheme might not be putting money in the coffers of the federal government but the national integration it fosters cannot be over-emphasised.

Governor Abdullahi Sule of Nasarawa State, who spoke in the same vein, said that he had headed many organisations that utilized the service of corps members, explaining that no amount of money can buy the unity that the scheme stands for.

While identifying with the virtues of the NYSC, Sule said it remained the only successful indigenous institution that brings Nigerian youths together to appreciate their diversity.

General Yakubu Gowon, a former Head of State and founder of the NYSC scheme, who joined the programme via Zoom, said it was the only scheme that could tell people how important and crucial they were to the national integration and unity of Nigeria.

Gowon said that 48 years was a long time and lauded the successive leadership of the scheme for their invaluable contributions that have kept the scheme growing from strength to strength.

Brig.-Gen. Shuaibu Ibrahim, the Director-General of NYSC, had earlier in his address of welcome said that he believed that the documentation of the scheme’s activities would enrich the knowledge of Nigerians.

“This is based on my belief that such endeavour will enrich the knowledge of Nigerians and non- Nigerians about the scheme.

“It will thereby engender a greater appreciation of its relevance and numerous achievements,” he said.

Ibrahim said that the publications would be veritable reference tools for researchers in addition to inspiring more patriotic zeal in youths.

The maiden NYSC film entitled ‘A Call to Service’ was among items unveiled to mark the scheme’s 48th anniversary.