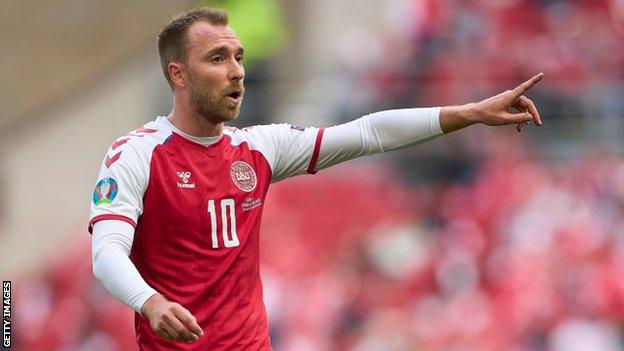 Christian Eriksen suffered a cardiac arrest during Denmark’s Euro 2020 fixture with Finland, it has been confirmed by Denmark’s team doctor.

Eriksen, 29, collapsed to the turf in the first half of the Group B fixture and was quickly attended by medics who sprinted to his aid.

The Inter Milan playmaker was stretchered off the pitch after receiving lengthy treatment and taken to hospital, where his condition stabilised.

The Danish FA provided a promising update on Eriksen’s condition on Sunday morning, saying he had been in touch with his teammates and would be kept in hospital to be monitored.

And in a press conference on Sunday afternoon, they provided details of what caused the terrifying incident at Parken in Copenhagen.

Boesen said: “We don’t have an explanation for what happened.

“I didn’t see it live, I saw it on the screen after it happened. You have seen the same as me, but there’s no explanation so far.

“Well, he was gone. We did cardiac resuscitation. And it was cardiac arrest. How close were we [to losing him]? I don’t know. We got him back after one defib (defibrillation), so that’s quite fast.”

Confirmation Eriksen suffered a heart attack confirms what many had feared, as the former Tottenham Hotspur star required resuscitation on the pitch.

Meyer told reporters: “Fundamentally, we and other nations follow two strategies: 1. We examine our players regularly for underlying health issues.

“The DFB does this comprehensively and I presume that the Danish FA does too.

“2. When such cases occur, it is vital that those involved are able to take the right steps. Doctors and trained medical personnel are on standby.

“We always have two defibrillators, in case one fails. The chain of command and communication is clearly defined and works well.

“I personally don’t think the DFB need take further action. We can never completely rule out these cases but we are well prepared. In fact, you could say we do too much.

“We consider the official recommendations as basic requirements, and we do even more.”