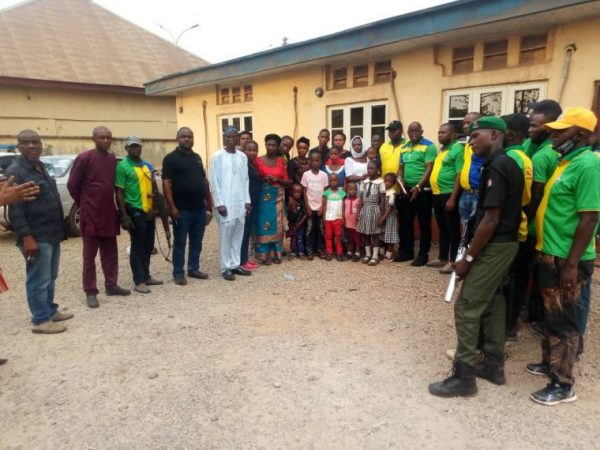 Relations of four deceased policemen in Ebonyi State have appealed to the Inspector-General of Police, Mohammed Adamu, to engage the bereaved widows or their children as a replacement to enable them sustain their families.

The relations raised the appeal in Abakaliki on Wednesday as they accompanied the immediate families of the deceased to receive the N1 million donation made to each of them by the Ebonyi State Government.

The amount was presented to them by the Commissioner of Police in the State, Aliyu Garba, in a mini ceremony held at the Officers Mess, State Command Headquarters, Abakaliki.

Speaking on behalf of the others, a relation to one of the deceased officers and a retired Assistant Superintendent of Police, Emmanuel Esheya, pleaded with Garba to extend their appeal to the Inspector General of Police, adding that such an offer was the general practice in the past.

Esheya argued that engaging them would help ameliorate the sufferings of their families occasioned by loss of their bread winners.

The retired ASP lamented that policemen have come under violent attacks from the public in present times and advised the officers and men of the force to always protect themselves, stressing that one needs to be alive in order to do his job.

Esheya stressed: “CP Sir, we want you to help make a case to the IGP to engage the wives of these dead officers in either some menial jobs or employ them or their children into the force as this will go a long way to assist them.

“And I want to advice our men in the force to protect themselves.

“Policemen in the country now are the target of every Nigerian without any just cause.

“Serving your country-sides has become a problem.

“Your lives should be important than anyone else’s.

“The gun they gave to you is for you to protect yourself.

“It is when you protect yourself that you can protect others.”

Recall that the late four Policemen: ASPs Ochieme Emmanuel and Edeth Ekpo, Sergeant Ifeanyi Ituma, and Police Constable James Chukwuebuka were on February 3, 2021 involved in a ghastly motor accident along Abakaliki-Enugu highway while returning from the troubled Effium community in Ohaukwu Local Government Area of the state.