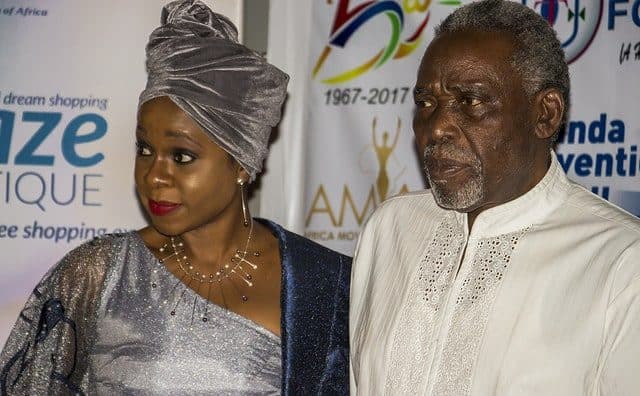 It was a great night of love, affection and celebration in Kigali, Rwanda as the 13th edition of the African Movie Academy Awards gala night was held.
The city, with its beautiful landscape and great visible development, was made more active and alive as big and well known movie icons from all parts of Africa and beyond, ranging from Olu Jacobs and his wife, Joke Silva, Doris Simon,Victor Osuagwu, Osita Iheme (Paw Paw) and Chinedu Ikedieze.
Also present was Biodun Kupoluyi, the Publisher of E247 Magazine and owner of Flip TV, amongst many other movie producers.
Peace Anyiam-Osigwe, the Director of PMO Media, expressed how excited she was about the 13th edition as a lot of hard work and sleepless night had been invested, especially because of the story of oneness and peace Rwanda has taught Africa and the world at large after going through a hard time of genocide.
Bringing the world at large to Rwanda through this edition of the AMAA gala night was the right move for the season, a dream come true, Anyiam-Osigwe said.
She expressed her deepest thanks to the Government of Rwanda for the open arms extended to the team for the program.
Nigeria’s DJ Humility and The Maestros Band practically set everything “ablaze” as they gave unending music interludes.
Ykbenda! A Rwandan artist, was also available to show a taste of Rwandan music.
He took the audience by surprise as his gesture and swagger was off the hook, with his song: #munakampala, which got everybody dancing and singing along.
The night ended with The Maestros Band, a Nigerian band under the directorship Bolanle Austen Peters of Terra Kulture, as it engaged all on unending music.
No doubt Rwandan will not forget the AMAA experience in a long time. Neither will AMAA and its crew forget Rwanda for her hospitality, food, beautiful land scape and structures.