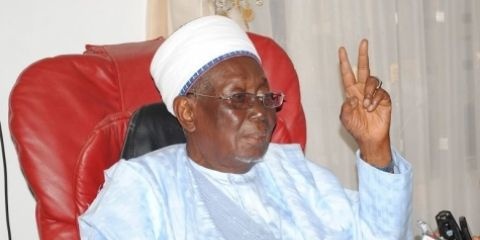 Alhaji Ibrahim Dasuki, immediate past National Youth Leader of the All Progressives Congress, has decried Nigeria’s continued dependence on oil.
Ibrahim disclosed this on Monday in Abuja while speaking with newsmen at the APC National Secretariat after obtaining the party’s Expression of Interest and Nomination forms to contest for the governorship of Gombe in 2019.
He said that being self-sufficient was the only way states of the federation, especially North-East states, could sustain their economy.
He, however, added that he would give health and education priority and ensure the diversification of Gombe’s economy if elected.
He said he would ensure youths’ involvement in commercial activities, adding that his administration would leverage on mechanization.
Dasuki said: “I want to equally say that we have to farm round the year, not the seasonal approach, because if you farm for months and wait for eight months doing nothing, of course, you will be poor.
“These are the things that are bringing insecurity, particularly in my zone because many people are not engaged in economic activities or businesses.
“So, we have to do something to ensure that our people are better in terms of generating income.’’
The News Agency of Nigeria reports that APC national secretariat has become a beehive of activities since the sale of Expression of Interest and Nomination forms for 2019 elections began on Thursday.
This is especially so as politicians and their supporters from across the federation troop to the secretariat to pick the forms ahead of Tuesday deadline for the sales.
Traders have also taken advantage of the large turnout of party members and supporters at the secretariat, located at Blantyre Street in Wuse Zone two, to do brisk business.
While some traders take the opportunity to display various souvenirs, others sell the party’s Constitution to members.
Commercial photographers also struggle to get the attention of party members who may want to take photographs for posterity.
Driving through the street has also become a herculean task due to heavy human and vehicular traffic. The security operatives attached to the party secretariat are having tough times trying to control the crowd.
The two hotels located on the street, Valencia and Barcelona, have continued to record high traffic of guests.