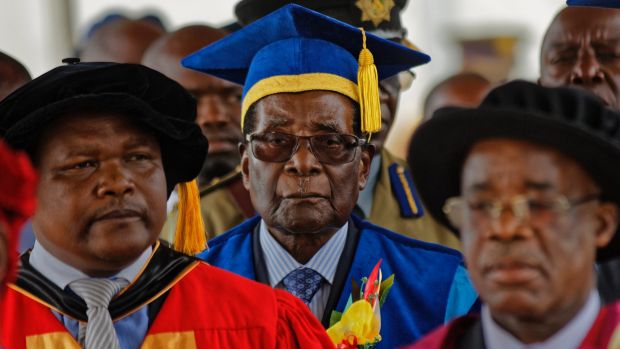 Zimbabwe’s governing Zanu-PF party has paid tribute to former President, Robert Mugabe, for his contribution to the Southern African nation before and after independence.
Spokesperson, Simon Moyo, told The Herald newspaper that people must “acknowledge that he did so much for the liberation of Zimbabwe and indeed as Prime Minister and President post independence”.
“He deserves to rest and I believe every Zimbabwean agrees with this position,” Moyo said, wishing Mugabe well.
Mugabe, who has led Zimbabwe since it attained independence from Britain in 1980, resigned on Tuesday following military intervention into government affairs.
At independence, Mugabe came up with policies of education, health and housing for all and ensured that more schools and health institutions were built for the previously marginalised majority blacks.
Because of his education policy, Zimbabwe is considered to have the highest adult literacy rate in Africa.
Chairman of the African Union Commission, Moussa Mahamat, welcomed Mugabe’s decision to step down, saying that the decision will go down in history as an act of statesmanship that can only bolster his political legacy.
Mahamat said: “It (AU) looks forward to Zimbabwe continuing to play a leading role in the affairs of the African continent, as a democratic and prosperous state meeting the aspirations of its people.”
He said Mugabe will be remembered as a fearless pan-Africanist liberation fighter, and the father of the independent Zimbabwean nation.