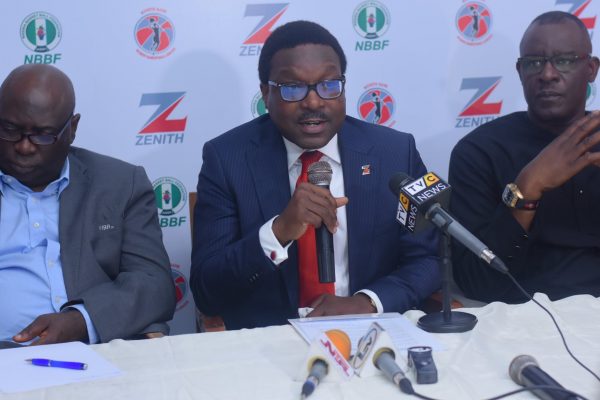 Zenith Bank on Wednesday doled out N24.6 million for the sponsorship of 2018 women’s basketball season.
This was disclosed during a media parley in Lagos on Wednesday.
Peter Amangbo, Group Managing Director, who was represented by Akin Ogunranti, the company’s Deputy General Manager, made the disclosure that the company was proud to support the league for the last 14 years.
Amangbo said the company was happy to announce to the public its plans to again throw its weight behind the National Women National League set to tip off on October 28.
He said: “Over the past 13 years, Zenith Bank Plc has sponsored NBBF/Zenith Bank Women’s National League as part of our contributions to the society and youth development.
“This is our core Corporate Social Responsibility, which also has come a long way with partnership with the NBBF since 2005, beginning with just four teams and now has grown to 19 teams.
“We are indeed delighted that our intervention has continued to yield tremendous result in the areas of women and youth development.”
According to Ogunranti, the sponsorship has raised the profile of women basketball in Nigeria and contributed in no small measure to the discovery of many talents who now play in the league.
He added that the bank was also very happy to host the historic senior national women’s team, D’Tigress, that won the 2017 FIBA Afrobasket, which held in Bamako, Mali.
He also said Zenith Bank also contributed financial support for the D’Tigress team that competed in the just concluded FIBA World Cup in Tenerife Spain.
Meanwhile, the Vice President, NBBF, Babatunde Ogunade, said Zenith Bank for the last 14 years had continued to show great support for development of basketball in Nigeria.
Ogunade acknowledged the bank’s support for the 2017 Afrobasket winning team and also their financial support for the FIBA Women World Cup.
He said: “Our kudos goes to the Bank for doing all what they have been doing over the years; we appreciate them for what they have done.
“They have continued to support female basketball in Nigeria for the last 14 years and look forward to many more years of partnership.”
Ogunade who represented NBBF President, Engr. Musa Kida, said that competition, with 21 teams competing for honours, will be played simultaneously in two conferences, the Atlantic (Enugu) and the Savannah (Abuja).
The competition will run from October 28 till November 2, where three teams from each conference will qualify to play in the National Finals holding in Lagos from November 3 to 7.
Winners and first runners up will represent Nigeria at the FIBA zone 3 Women’s Champions qualifiers.