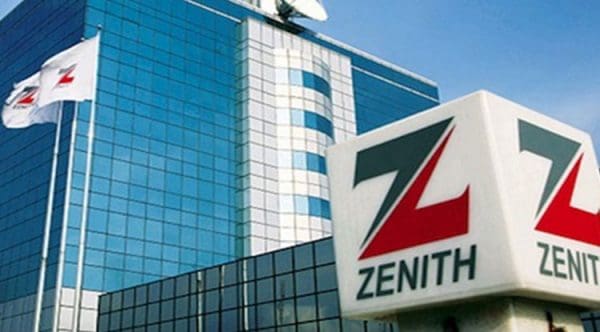 In a clear demonstration of its resilience and strong market share, Zenith Bank Plc has announced its audited results for the half year ended June 30, 2019, recording positive growth across key financial metrics, thus affirming the bank’s position as one of the leading financial institutions in Africa.
As a testament to its commitment to its shareholders, the bank also announced a proposed interim dividend pay-out of 30 kobo per share.
Gross earnings grew by 3 per cent from N322.2 billion to N331.6 billion driven by a significant growth of 24 per cent (YoY) in non-interest income from N88.6 billion in H1 2018 to N109.7 billion in H1 2019.
In particular, fees from electronic products increased by N17 billion (168%) from N10 billion in H1 2018 to N27 billion in H1 2019, demonstrating significant progress in the bank’s retail banking initiatives.
This top-line growth filtered through to the bottom-line as Profit Before Tax increased to N111.7 billion, reflecting a 4 per cent growth over N107.4 billion reported in H1 2018 with earnings per share increasing by 9 per cent to N2.83 billion in H1 2019 from N2.60 billion compared to the prior period.
Between December 2018 and June 2019, the Group’s total deposit increased by 3 per cent with retail deposits growing by N267 billion (31%), from N861 billion to close at N1.1 trillion.
Despite the growth in our deposit base, the bank said it optimized interest expense leading to a 4 per cent reduction from N74.7 billion to N72.1 billion due to the Group’s improved funding mix and profound treasury management skills.
Net Interest Margins witnessed a compression from 10 per cent in the same period last year to 8.6 per cent in H1 2019, as a result of the declining yield environment but cost of funds improved from 3.4 per cent to 3.0 per cent.
The banks said its robust risk management ensured that its absolute Gross Non-Performing Loans remained flat.
However, the marginal movement in NPL ratio was as a result of the 3 per cent reduction in its loan book from N2.02 trillion as at December 2018 to N1.95 trillion at the end of the period.
It said it is creatively deploying new retail loan products to ensure it captures a reasonable share of the retail loan market, adding that it remains committed to maintaining a strong balance sheet with liquidity ratio at 74.6 per cent and Capital Adequacy Ratio at 25, ensuring it remains above regulatory thresholds.
A statement by the Bank on Monday added: “Going into the second half of the year, we will continue to consolidate our leadership in the corporate space while our retail banking drive will continue unabated. We expect to see an improvement in economic activities even as we maintain our promise of delivering a unique service experience to our customers.
“Consistent with this superlative performance and in recognition of its track record of excellent performance, the bank was recently ranked as the Most Valuable Banking Brand in Nigeria in 2018 by The Banker Magazine. Similarly, Zenith Bank was recognized as the Best Corporate Governance Bank in Nigeria by The World Finance for the sixth time just as Ethical Boardroom, a Europe based Boardroom watchdog reaffirmed this recognition by naming the bank as the Best Bank in Corporate Governance in 2018. Recognition has also come the way of the bank as it was recently named as the Best Institution in Sustainability Reporting in Africa 2018 (SERAS Awards) and the Bank of the Year 2018 (BusinessDay).”