Zainab Ahmed: When not to be a Finance Minister, by Bisi Daniels 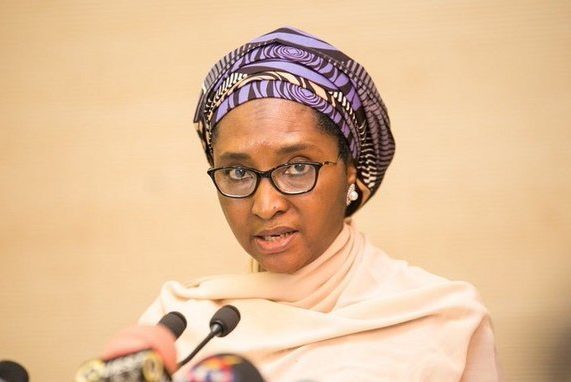 If as it has been suggested, facial expressions and body movements account for between 60 to 65 per cent of all communication, the plain public face of Zainab Ahmed offers nothing in body language about her current position as Minister of Finance, Budget and National Planning. As prestigious as the portfolio is, it comes with delicate responsibilities and high public expectations.

The occupant of that office is the immediate recipient of blame for an economy gone wrong; and with the current economic challenges, the seat must be hot enough to leave traces on her.

Yet, at best, people gifted with the power of description can only describe Ahmed’s public face as plain, tending towards seriousness and devoid of emotions. A lady called her “Obirin Metta” in the Yoruba language, meaning a powerful woman with a three-in-one portfolio, but even that leaves no shade of pride or fatigue on her.

“If she wears pride because of her important ministry,” one observer said, “you would have heard lawmakers, she often meets with, accuse her of arrogance or even threaten her with arrest.

Another test of her humility came when Edo State Governor, Godwin Obaseki, accused the government of “economic rascality” for allegedly printing money for the Federation Account Allocation Committee to share among the tiers of government. Her response was measured. She said: “The issue that was raised by the Edo State Governor for me is very, very sad because it is not a fact. What we distribute at FAAC is revenue that is generated and, in fact, distribution of the revenue is public information. We publish revenue generated by FIRS, the Customs and the NNPC, and we distribute at FAAC. It is not true to say we printed money to distribute at FAAC; it is not true.”

The weight of her portfolio, including the unceasing flow of high-level meetings she attends frequently are expected to leave stress marks of her face, but none is visible. Not even the burden of the national economy has been able to leave marks, any more than her trademark glasses has.

Confident on of her job, she looked like one who has no worries for a long time until she confessed she has them, including one that causes her sleepless nights. Asked by Poju Oyemade, Senior Pastor of Covenant Christian Centre, during The Platform, an annual conference organised to mark Nigeria’s Independence anniversary, to list three things that keep her awake at night, the minister replied: “Number one is revenue, number two is revenue and three – I would say, is revenue.”

Ahmed’s availability for the event also attests to the modesty and accessibility of a minister who has also granted lengthy interviews to many mainstream newspapers. Knowledge of the complexities of her portfolio should also equip her with the understanding that Nigeria’s lean revenue base, which has been further eroded by the socio-economic impact of the COVID-19 pandemic, offers scary scenarios to anybody who understands basic economics.

However, even as one rejoices with the minister over recent increases in oil prices, the joy is quickly discounted by the burden of fuel subsidy the Federal Government has tied around its neck. One observer was recently rejoicing for her over the affinity of oil prices with the roof at over $70 per barrel until the Group General Manager of the Nigerian National Petroleum Corporation, Mele Kyari, deflated him with the explanation that higher oil price was ironically bad news for the economy.

Kyari described the rising price of crude oil as a “chicken and egg” situation, expressing concern that the prices had started exiting the comfort zone set by the NNPC to becoming a burden. Kyari put the comfort zone globally at $58 to $60, saying that for the NNPC, anything above $70 per barrel will create major distortions in the corporation’s projections and add more problems to it.

Clearly an embarrassing irony, but as a top member of a government that chooses socio-political stability at a high economic opportunity cost, a Finance Minister can only add the search for a balance to her job. Also, although she has persistently argued that the country’s increasing debt burden is manageable, Ahmed does not fail to recognise the poor revenue match.

According to her: “The Nigerian debt is still within sustainable limit. What we need to do as I have said several times is to improve our revenue to enhance our capacity to service, not only our debt, but to service the needs of running government on day to day basis. So our debt currently at about 23 per cent to GDP is at a very sustainable level if you look at all the reports that you see from multilateral institutions.”

Similarly, the Debt Management Office recently reacted swiftly to recent reports that the World Bank had classified Nigeria among high-risk debtor countries. Denying that Nigeria is a high-risk country, the DMO said Nigeria’s IDA’s debt stock as at June 30, 2021 was $11.7 billion, explaining that the loans represent one of the most favourable borrowing options for countries like Nigeria and is also consistent with the Medium Term Debt Management Strategy of the Federal Government. However, the current burden of debt-serving could be intimidating.

While it may be comforting that chucks of the borrowed funds go into infrastructure financing, it can only be hoped that the next government will not be profligate or be afflicted with a poor maintenance habit. The debt will still be there.

The Director-General of the Budget Office of the Federation, Ben Akabueze, recently provided another dimension of the revenue question when he admitted that Nigeria’s federal budget, at 4.6 per cent of the gross domestic product, is “too low in terms of number and the socio-economic challenges.” According to Akabueze, the country’s revenue to GDP is currently about eight per cent, just a percentage ahead of Sudan, which sits on the bottom of the regional ranking. South Africa’s 29 per cent, and Algeria’s 33 per cent compared to a 22 per cent regional average.

Also, with an inflation rate of 17.38 per cent, down for three consecutive months, 82.9 million Nigerians adjudged to be living in poverty, Gross Domestic Product of 152,32 trillion Naira in 2020, and an annual growth rate of 0.51 per cent as at March, 2021, the macro-economic indicators look promising but could be better for a country in need of fast development.

The problem boils down to the low revenue base of the country with a widening expenditure profile.An observer said recently that anytime she hears of fresh payment approvals by the Federal Government, especially for unions that should know the state of the economy, she pities the Finance Minister, wondering if “Nigeria’s cloth is being cut according to size or the material.”

Concerned about the trickling revenue stream, Ahmed said: “We have been trying to block and also enhance the cohesion of our people, especially within the revenue ecosystem. We have invested in IT system and trying to collaborate and bring things together. We have a process whereby monthly, we sit down and reconcile our revenues and tally up the numbers. We are working on interfacing all the IT systems to see companies’ revenue on a real-time or near real-time basis. I am prioritising revenue generation as the biggest challenge. As a result, I am steering my team to implement some revenue growth strategies aimed at boosting revenue performance, by deploying new initiatives.”

The Minister also constituted Tax Appeal Tribunals across the country to accelerate the resolution of over 209 pending cases relating to tax revenues of about $18.804 billion, N205.654 billion and €0.821 million. To improve accountability and ultimately improve the performance of Government-owned Enterprises, the expenditure plans of the revenue generating entities were reviewed for the introduction of more proactive revenue tracking and monitoring mechanism.

Also, through improved planning and a harmonious relationship with the legislature, the country has restored its more business-friendly January-December budget year. The 2020 winner of the Finance Minister Prize of the African Banker Awards has been commended for “pushing through a set of difficult reforms as well as successfully engaging international partners to help the country navigate an extremely challenging economic environment.”

Ahmed admitted last week: “The year 2020 was like no other year, particularly due to the impact of the COVID-19 pandemic, Our three-year consecutive growth in the GDP was stalled at the second quarter of 2020 by the harsh economic impact of the global pandemic.”

The Ministry helped to take the economy through the frightening months of COVID-19, and also helped to set it on a path to steady growth. Under her charge, the Finance Act 2019 was passed at a record time before the 2020 budget.

Counting the benefits, she said: “Through the Finance Act, we have achieved the following: Value added tax (VAT) rate increase from 5 percent to 7.5 percent, which was implemented in February 2020; introduction of a N25 million threshold for small and medium enterprises (SMEs) for eligibility for VAT collection; reduction of tax rates for SMEs (0 percent and 20 percent respectively); administering of the Finance Act 2019; automation of import duty exemption certificate (IDEC) and vehicle registration (V-REG); and automation of the collection of stamp duty.”

Other achievements include defraying  inherited debts and liabilities since 2015 such as the refund of the $5.4 billion Paris Club debt over deductions; payment of the $6.8 billion Joint Venture Cash Call arrears and N1.9 trillion contractor/Export Expansion Grant as well as N488 billion refund to states for roads.

Despite her achievements, challenges persist, some of them as big as the urgency to increase revenue streams and growing the economy fast enough to effectively address poverty, as well as ensuring an all-inclusive economy. The challenges are some of the reasons it may not be the right time for one to enjoy the leadership of the A-class ministry.

But Ahmed is showing that when not to be a finance minister is when one is, indeed, needed.Criticisms that she is not a core economist, like some other countries have, falls flat in her obviously high economic literacy, her ability to match the world’s brightest and the best at global fora, and more importantly, the fact that in the face of the daunting economic challenges, she has shown high managerial expertise. Her experience as Minister of State for Budget and National Planning before her promotion has also served her well.

In fact, in a recent paper published by Mark Hallerberg and Joachim Wehner, in the Washington Post, they tried to find out “why governments sometimes appoint economic policymakers with economics training but often do not.”  By studying the qualifications of more than 1,200 prime ministers, presidents, finance ministers, and central bankers in various democracies since the 1970s, they uncovered that in many older, established democracies, most prime ministers and finance ministers don’t have much training in economics. “Central bankers, for their part, typically tend to have more expertise, but even here, there aren’t nearly as many PhDs as you’d expect.”

They also found that most governments are already staffed with thousands of trained economists and might be far more important for a leader to be a competent manager with political savvy than to have a lot of technical expertise.

Ahmed exhibits calmness and courage, doing her job effectively without drama and clatter. With hardwork and belief in the economic prosperity of the country, even during scary times, like during the heat of the COVID-19 pandemic, slump of oil prices and the recent recession, Ahmed continues to inspire hope.

Bisi is an author and journalist based in Lagos.

Peter Obi and those Onitsha Market polls, by Fredrick Nwabufo