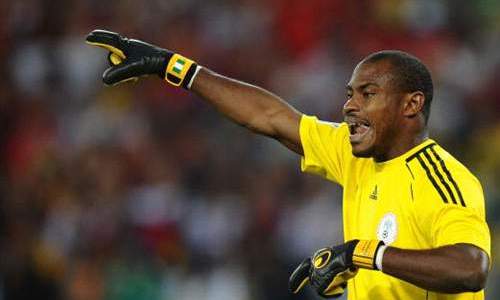 Super Eagles assistant skipper, Vincent Enyeama, says Skipper Joseph Yobo remains the authentic leader of the national team and he is predicting that he will be back in no time to the national team because of his wealth of experience.
Speaking from his base in Israel to Eagles Media Officer, Ben Alaiya, Enyeama said whether Yobo is a starter for the national team or not, all the players of the team still believe in his leadership qualities, same as the coaching crew headed by Stephen Keshi.
Enyeama said: “We have to be careful how we handle senior players of the national team because we need their experience, leadership and above all they serve as motivation to the younger players.
“That is why Yobo is still important and the technical crew knows so.
“If we treat them well, the level of commitment of both the old and the new players will be total but if we do otherwise, we will have problems on and off the pitch.”
Enyeama is Maccabi Tel Aviv Fc shot stopper.
Enyeama assured Nigerians that the Super Eagles will make it to the 2014 World Cup in Brazil, noting that the draw in Calabar against the Harambee Stars of Kenya last month, will be corrected in the return leg in Nairobi.
Meanwhile, players of the national team have continue to heap praises on Globacom boss, Otunba Mike Adenuga; Chief Emeka Offor; the Delta State Governor, Dr. Emmanuel Uduaghan; his Lagos State counterpart, Babatunde Raji Fashola; Obong Godswill Akpabio of Akwa Ibom State; and Cadbury Nigeria Plc for making good their promises to reward the national team for winning the Nations Cup in South Africa.
The players also said they believe that other prominent Nigerians, who have made promises to reward the team like Africa’s richest man, Alhaji Aliko Dangote, Alhaji Isyaku Rabiu, Jim Ovia, former Anambra State Governor Senator Chris Ubah and former UBA Plc Chief Executive, Tony Elumelu will also make good their promises to the team to boost their next set of campaigns.