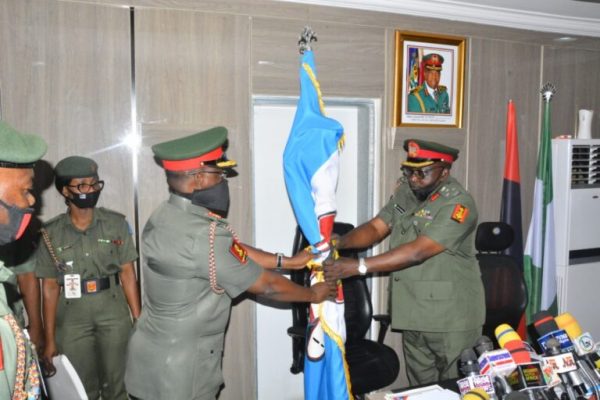 Yerima took over from the erstwhile Director, Brigadier General Sagir Musa, who had been redeployed to the Nigerian Army Training Centre, Kotangora, Niger State.

He described his appointment as homecoming, saying he had come a long way with the media in terms of professional relationship and patriotic duty to the nation.

The new army spokesperson said he had devoted the better part of his career in the military to relationship with the media to give the right information about the military and its operations to the people.

He said the media had been helpful and friendly to him in his previous assignment as defence spokesperson, adding that providence had once again brought him back to working with the media.

“We shall be open to constructive engagements and criticisms that will support military operations against  enemies of the country,” he said.

He gave assurance that the Nigerian Army under the current Chief of Army Staff, Major General Ibrahim Attahiru, would value the partnership and cooperation of the media.

According to him, the COAS, who was once in this position, is ever so determined to sustain the enduring relationship with the media through trust, respect and mutual understanding.

Yerima said: “On my  part as the spokesman of the Nigerian army, I assure you that my doors will be opened at all times to respond to your enquiries.

“My team and I will do all we can to make your job of informing Nigerians much easier.”

Yerima said the Nigerian media was an indispensable partner with military in the protection and preservation of Nigerian project.

”It is our collective responsibility to ensure that through the patriotic discharge of our different constitutional obligations, our country remains secured, peaceful and progressive,” he said.

He urged the media to contribute its quota to ensuring that the military defeat nation’s enemies, who had the intent to destroy the country via insecurity.

According to him, nothing boosts the morale of the fighting troops more than the solidarity of all Nigerians, especially media reports that ginger their zeal and fighting spirit and sacrifice to the nation.

“So, I urge you to be very mindful of that and to always remember that their victory is the victory of all Nigerians,” he said.

Musa stated that throughout of his two years as army spokesperson, he was able to manage the image of Nigerian Army diligently and professionally even at the critical time the nation was confronted with security challenges.

He commended the former COAS, retired Lieutenant General Tukur Buratai, for finding him worthy to command the directorate.

Musa also thanked the current Chief of Army Staff for appointing him a member of the Training Team at NATRAC.

He also commended the officers, soldiers and the civilian staff of the directorate for their loyalty and numerous support for his successful tenure.

He, therefore, congratulated his successor who, he described as his mentor and friend, and enjoined all  staff of the Directorate to support him to succeed.