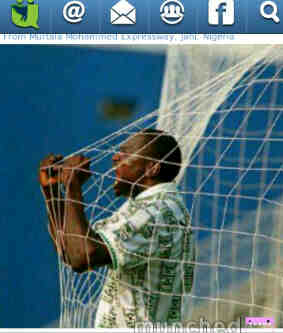 Eulogies continue to trail legendary Rashidi Yekini as former Abia State Governor, Dr. Orji Uzor Kalu, over the weekend prayed the Federal Government to honour him as a star who once refused to play against the Eagles in a 1994 friendly against his Portuguese side, Vitoria Setubal.

According  to Kalu:”It was a pre-USA ’94 World Cup friendly. Yekini’s side listed him against the national team. He backed out. I remember his exact words: ‘It is possible at club level, but I would not do it against Eagles. I will not try it. I’d prefer to watch instead of playing against my country’. That is enough to honour this hero.
“Of course,Yekini had tormented Iwuanyanwu Nationale in the 1990 CAF Champions’ Cup against Africa Sports of Cote D’ivoire. The game was moved from Abidjan to Seguela and club President, Simplice Zinsou, promised the Nigerian the equivalent of N24,000 for every goal scored against his countrymen.
“Yekini struck in the 18th minute. It took Ifeanyi Aghenu’s last minute effort for the Naze Boys to draw level. In the Benin second leg, Yekini did it again in the 18th to cancel Thompson Oliha’s goal. Nationale were lucky to win 3-2.”
The ex-governor could not come to terms with talks about Yekini’s mental state before he died.
However, he pleaded with the Minister of Sports, Bolaji Abdullahi, to use more than ‘Kwara connection’ in bringing President Goodluck Jonathan to recognise Yekini in death.
“As a footballer, Yekini was a party freak. He said it himself. He loved rice with fried plantains, played basketball, dotted on his siblings, Akeem and Sumaila, was a good swimmer and after marriage was fond of his wife, Patience, whom he renamed Maryam,” Kalu added.
Born to Yekini and Sikiratu Balogun on October 23, 1964, young Rashidi helped his glazier dad even as pupil of ABS school Kaduna.
He would later train as a car painter.
Active soccer began in 1981 when his friend, Ade, took him to Coach Muniru Sule of UNTL Kaduna.
In 1984, he joined Shooting Stars alongside Sola Akinsola, Daniel Abdulahi, Kayode Aina and Olu Kalejaye.
Yekini also played for Abiola Babes.