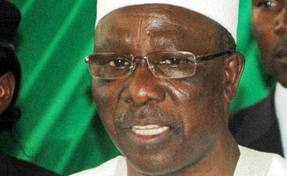 Newly sworn in Governor Muktar Ramalan Yero of  Kaduna state has pledged  to build on the foundation laid by the late Governor Patrick Ibrahim Yakowa . The 43-year old Ramalan Yero was sworn into office at a solemn ceremony at the Sir Kashim Ibrahim House, Kaduna.

Yakowa died  last Saturday in  the Naval helicopter crash in Bayelsa state, along with a former NSA , Gen. Owoye Azazi, and four other persons. Yero has announced in a broadcast that Yakowa’s remains will arrive Kaduna on Monday. Also, the new governor in a broadcast declared 7 days mourning . Flags are expected to fly at half mast during the period. Also, local government councils are to open condolence registers throughout the state.

Earlier, Justice Raheela Cudjoe, Kaduna state Chief Judge administered the oath of allegiance and the oath of office on Yero, making him the 18th governor of the state since its creation in 1976.

Yero praised his predecessor whom he described as  as a detribalized governor. “We are living testimonies to the fact that our amiable Governor, Sir Patrick Ibrahim Yakowa, served humanity in various and diverse capacities and has suddenly, without notice, returned to our Creator.

“His humility, dedication to duty, fairness to all a d a high sense of humour, endeared him to many, irrespective of religious, tribal or sectional inclinations.