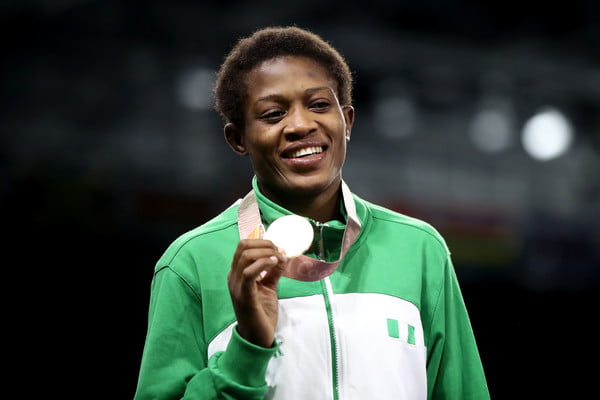 The Nigeria Wrestling Federation on Friday said it was impressed with Odunayo Adekuoroye’s performance at the ongoing Matteo Pellicone Ranking Series tournament in Rome.
The President of NWF, David Igali, told the News Agency of Nigeria on telephone from Rome that he was happy with Adekuoroye’s gold medal win.
Igali said: “I was happy to see how Adekuoroye wrestled, she wrestled with a lot of composure.
“She’s getting more experienced, she’s getting more confident, she is deciding the pace of matches and I like what I see.”
Igali, who is also the Commissioner for Sports in Bayelsa State, said there were other few initiatives to be worked on by the federation.
He said: “A few things that we need to add to our wrestling, but so far in January, I’m happy with the form she is in.
“My goal for this year is to see that our athletes get ranked in the top four and get sitting at the Olympics and so far results prove that we are on the right track.
“It is also our desire to see our athletes compete a few times this year and so far we’ve started on the right footing by competing in January.”
NAN reports that Adekuoroye, a two-time Commonwealth champion, clinched gold in the 57kg.
After convincingly taking out her opponents in the earlier rounds, Adekuoroye overpowered India’s Anshu Anshu 10-0 via technical superiority in the final to win the gold.
On her way to the final, the former World Number One overcame Alina Akobii of Ukraine 12-0, before recording a 10-0 victory via technical superiority over home girl Arianna Carieri in the quarter-finals.
In the semi-finals, she outclassed USA’s Allison Ragan 10-3 to advance to the gold medal match.