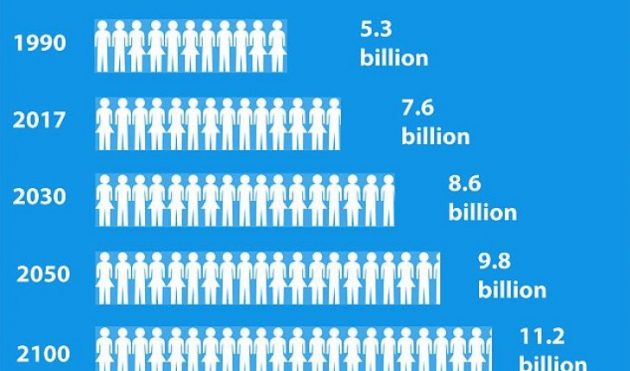 Share
Facebook Twitter LinkedIn Pinterest Email
The world’s population is set to grow by 2.2 billion between 2018 and 2050, the UN Population Fund has said.
UNFPA, in its “State of World Population 2018” survey released in Geneva, said more than half of that growth – 1.3 billion – is likely to be in sub-Saharan Africa.
According to UNFPA, there are 43 countries where women have more than four or more children, and 38 of these are in Africa.
In all but five East African countries, fewer than half of all women surveyed said they would prefer not to have any more children.
According to UNFPA’s predictions, Africa’s share of the world population will grow from 17 per cent in 2017, to 26 per cent in 2050.
On the African continent, fertility rates were “significantly lower” in cities than in rural areas, the report indicated.
In Ethiopia, women have around 2.1 children in cities, whereas they have around five in the rest of the country.
The UN agency said in sub-Saharan Africa, women’s rights were hampered by limited access to healthcare and education, along with “entrenched gender discrimination”.
Monica Ferro, Director of UNFPA in Geneva, said the trend globally was toward smaller families, indicating that more people are making choices about exactly how many children they want, or can afford to raise.
Ferro said: “No matter if it is a high fertility-rate country or low fertility-rate country, in both of them, you will find individuals and couples who say they don’t have the number of children they want.
“They either have too many or too few.”
Underlining the link between conflict and insecurity with bigger families, the UNFPA data also shows that Afghanistan, Iraq, Palestine, Timor-Leste and Yemen have higher fertility rates than the overall average of 2.5 children per woman.
Ferro said: “In developing countries, 671 million women have chosen to use modern contraception.
“But at the same time, we know that 250 million in the developing world want to control their fertility, and lack access to modern contraceptive methods.”
She said in the nearly 25 years since the landmark International Conference on Population and Development was endorsed by 179 Governments, people’s reproductive rights have “substantially improved around the world”.
She noted that States agreed then that it was important for couples and individuals to decide the number, spacing and timing of their children, and that such decisions were made free from discrimination, coercion or violence.
Ferro added: “Every year, 300,000 women die during pregnancy or childbirth because they have no choices in maternal healthcare; every day, thousands of girls are forced into child and early marriage and are victims of female genital mutilation.
“They have no choices.”
NAN.
Geneva Monica Ferro UNFPA World Population
Share. Facebook Twitter Pinterest LinkedIn Tumblr Email