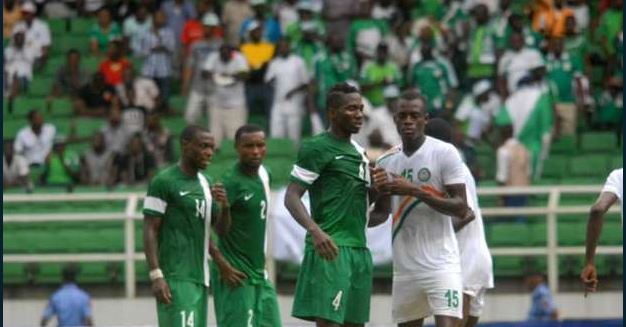 Nigeria’s Super Eagles settled for a disappointing scoreless draw against Swaziland in Friday’s 2018 World Cup qualifier at the Somhlolo National Stadium in Lobamba.
The home side saw off Djibouti 8-1 in the previous round and once more impressed against Nigeria as they came close to a surprise win.
Harris Bulunga’s men created a number of chances to emerge victorious from the first leg of their second-round fixture, but Carl Ikeme proved to be too much of an obstacle between the posts.
Nigeria were first to threaten when Ahmed Musa tried his luck from 25 yards out after 15 minutes of play, but the CSKA Moscow star failed to get his opportunistic shot on target.
Swaziland then looked dangerous via captain Tony Tsabedze, but Nigeria goalkeeper Ikeme comfortably kept his shot out.
The visitors came close to opening the scoring in the 27th minute after a free-kick from Ogenyi Onazi, but Swaziland keeper, Nhlanla Gwebu, first kept out the Lazio man’s attempt before denying Musa from the rebound, with Odion Ighalo eventually tapping wide from close range at the third attempt.
Sanele Mkhweli then had a chance for Swaziland after a good corner from the right, but the 23-year-old headed just wide from five yards out.
Felix Badenhorst threatened shortly before the interval, yet the Mbabane Swallows midfielder headed just wide.
Nigeria made a fine start to the second half and should have gone ahead in the 47th minute.
Machawe Dlamini mishit his clearance, handing Ighalo a clear opportunity to make it 1-0, only for the Watford man to miss the target.
Mxolisi Lukhele played a quick one-two with Sabelo Ndzinisa shortly after to open up the Nigerian defence, but he was unable to trouble Ikeme with his shot.
Rabiu Ibrahim left Gwebu without a chance with a sublime free-kick in the 58th minute, but the substitute was unlucky to see his shot hit the crossbar.
Musa could have netted a late winner after dancing past his marker, but he blasted wide as it remained goalless.