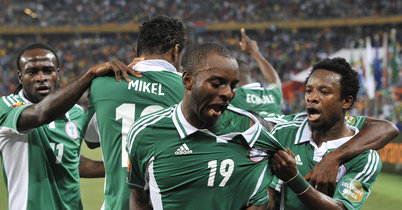 If feelers from the secretariat of the Nigeria Football Federation are anything to go by, the U.J. Esuene Stadium Calabar, Cross River State might not host the last second round match of the 2014 Brazil FIFA World Cup qualifier encounter between the Super Eagles and the Flames of Malawi on September 6 this year.
An impeccable source close to the Glass House told The Eagle Online over the weekend that the federation hinged the possibility of dumping the Calabar stadium on the gradual return of peace in Kaduna and the near completion of the Abuja stadium, adding that it is considering either Abuja or Kaduna for the encounter.
Stressing that the federation used the CHAN qualifier encounter between the home-based Super Eagles and their Elephants of Cote d’Ivoire counterpart at the Ahmadu Bello Stadium, Kaduna on Saturday to test run the situation ahead of the September tie.
Our source further added that the federation hinged the choice of either Kaduna or Abuja on proximity and reduction of the overhead cost.
Our source further revealed that once Head Coach, Stephen Keshi, and the technical sub-committee endorse the arrangement, the federation, on final approval, would communicate same to the Cross River State Government.
The source added that the federation was being cautious in handling the situation to avoid straining the good relationship with the state government.
The source said: “Let me inform you that the federation may not take our last World Cup qualifier match against Malawi to Calabar again. Although the Glass House is still looking at the possibility, there were strong indications that the federation might settle for either Kaduna or Abuja for the September tie.
“The factors the federation considered is the proximity of either Kaduna or Abuja to help them reduce the cost of prosecuting that match. Already, the successful test running of Kaduna with the home-based Eagles clash against Cote d’Ivoire may have sealed any possibility of taking the qualifying match to Calabar.
“As it were now, the federation is just waiting for the inputs of the Eagles gaffer and the technical sub-committee to take the final decision before communicating same to the Cross River state government even though it is cautious about the decision straining the long relationship with the state government.”
However, when The Eagle Online sought the reaction of the General Secretary of the federation, Barrister Musa Amadu, he did not debunk or confirm the plan to dump Calabar, stressing that it is too early to talk about the venue of the Malawi encounter.
Amadu said the factors to be considered in choosing a venue for the encounter would include adequate security and provision of logistics.
Amadu told The Eagle Online: “I have nothing to say about the venue for that match, it is rather too early for anybody to think about the venue of that match. All we want Nigerians to know is that it will be played here in Nigeria not outside the country. I want to also assure that the venue will be conducive in terms of security, home support and every logistics that would ensure that the Super Eagles get at least a draw to qualify to the World Cup third round. There is nothing to fear whatsoever.”