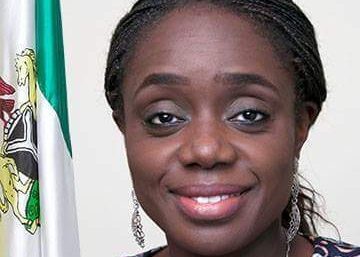 The World Bank Group on Wednesday denied that the Bank disagreed with the Minister of Finance, Kemi Adeosun, over the borrowings by the Nigerian Government to stimulate the economy and finance infrastructure projects in the country.
In a mail to the Minister by the Senior Communications Officer of the World Bank, Rachid Benmessaoud, the Bank averred that the media misrepresented and quoted out of context the comments made by its Senior Economist for Nigeria, Gloria Joseph-Raji, at an event in Abuja.
Benmessaoud said: “On October 11th, during the launch of Africa’s Pulse, the World Bank’s biannual analysis of African economies, World Bank Senior Economist for Nigeria, Gloria Joseph-Raji, was asked by a reporter to share her views on the Federal Government’s plan to increase external borrowing.
“At no point did she mention that the World Bank and the Federal Government of Nigeria (FGN) disagree on the need to rebalance the country’s debt portfolio. Where expenditures exceed revenue, governments will need to borrow.
“In doing so, the Federal Government is trying to rebalance its portfolio towards more external borrowing with lower interest rates and longer maturities.”
The World Bank Senior Economist was quoted by Benmessaoud to have commended the Nigerian Government’s effort to rebalance its portfolio in order to lower the cost of its borrowing, as outlined in its 2016-2019 medium term debt management strategy released last year.
Joseph-Raji was further quoted to have stated: “The use of IDA concessional financing, among others, is supportive of the FGN’s effort in this regard, with the added focus on poverty alleviation and building shared prosperity in Nigeria.
“The latest issue of Africa’s Pulse points out that growth in Nigeria is projected to pick up from 1.0 per cent in 2017 to 2.5 per cent in 2018 and 2.8 per cent in 2019. While Government debt in 2017 is projected to rise, it remains low in Nigeria.”
The World Bank spokesman expressed the Bank’s full commitment to help the Nigerian Government restore macroeconomic resilience as well as strengthen the ongoing economic recovery and achieve sustainable inclusive growth.
Adeosun, who led the Nigerian delegation to the 2017 Annual Meetings of the International Monetary Fund and the World Bank Group, had in Washington on Sunday said the Federal Government would be prudent in the management of its foreign borrowings.
She noted that the Government adopted an expansionary fiscal policy with an enlarged budget in order to deliver a fundamental structural change to the economy, thereby reducing the country’s exposure to crude oil.
She said: “Why are we borrowing? Mobilising revenue aggressively was not advisable, nor indeed possible, in a recessed economy. But as Nigeria now reverts to growth, our revenue strategy will be accelerated.
“This is being complimented by a medium-term debt strategy that is focusing more on external borrowings to avoid crowding out the private sector.
“This would also reduce the cost of debt servicing and shift the balance of our debt portfolio from short-term to longer-term instruments. This Government will be very prudent around debt. We won’t borrow irresponsibly.”
The foreign borrowings, which are at lower interest rates, according to Adeosun, will also prevent job losses.
She said: “With Nigeria’s source of revenue dropping by nearly 85 per cent, the country had no option but to borrow. The option before the country was to either cut public services massively, which should have led to massive job losses, or borrow in the short-term, until it begins to generate sufficient revenues, she said.
“We felt that laying-off thousands of persons was not the best way to stimulate growth. Also, when we came into office, about 27 states could not pay salary. If we had allowed that situation to persist, we would have been in depression by now.
“So, we took the view as a government that the best thing to do was to stimulate growth and spend our way out of trouble, get the state governments to pay salaries, making sure that the federal government pays and invests in capital infrastructure.”