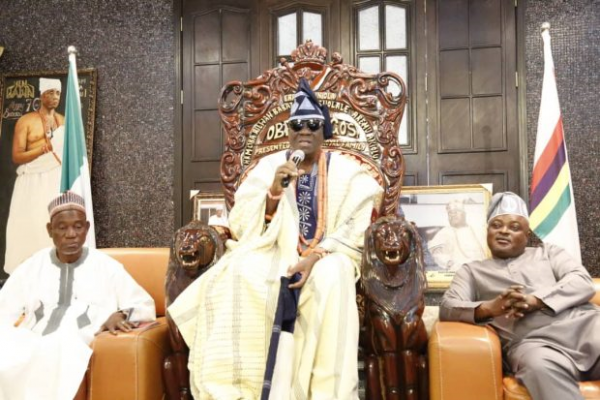 Oba Rilwan Akiolu, the Oba of Lagos, has urged Babajide Sanwo-Olu, the governorship candidate of the All Progressives Congress, to work for the people of Lagos through good governance that will improve the quality of their lives.
Oba Akiolu gave the advice when Sanwo-Olu paid him a courtesy call in his palace at Iga Iduganran, Isale Eko on Monday as a part of his broad-based engagement with diverse stakeholder groups in the state.
The royal father, who prayed for a successful outcome of the gubernatorial election for Sanwo-Olu, implored him to make service to the people the focal point of his administration, adding that Lagos since 1999 has had governors that positively impacted the state through provision of social services and development of infrastructure.
He said: “Asiwaju Bola Tinubu started a very good work in Lagos and fought for the interest of Lagos.
“Babatunde Fashola also did very well and Akinwumi Ambode who is presently in is also doing well.
“When you get to office, by the grace of God, you must carry on with the good work of your predecessors and take Lagos to higher level of development.
“I will always be around to offer you good advice. Everyone knows that I will always say the truth to anyone.”
Obi Akiolu also charged the APC candidate to be mindful of the people he will surround himself with, as many people in politics are only after what they will benefit for personal aggrandizement.
He said: “I will also implore those of you following him now not to betray him.
“Your work is to help him succeed.
“I pray for you that as you move on in your campaign all of you will achieve success together.”
In his response, Sanwo-Olu expressed his gratitude to the monarch and his chiefs, who came to receive him and his entourage.
He promised that he will diligently serve the people of Lagos by running an inclusive government.
Sanwo-Olu reiterated the fact that he has developed comprehensive policies and plans that are in line with the APC manifesto, which will vigorously implement if elected by the people of Lagos.
He said: “Kabiyesi, the campaign will officially start in few days from now and before we begin to ask for votes, we decided to see you – our father to ask for your prayers and blessings.
“We know the importance of the prayer of a father to his children.
“I am happy you have given us your blessings.
“By the grace of God, we know we will get victory.
“I want to assure you that we will work for the people as you have demanded of us.
“My primary purpose for coming out for the position of Governor is to work for the people.
“I don’t have any other motivation beyond my readiness to serve the people.”
The APC candidate was accompanied on the visit by the Director General of his Independent Campaign Group, Tayo Ayinde; former Ministers of State for Defence, Senator Musiliu Obanikoro and Demola Seriki; Sunday Dare, Executive Commissioner of the National Communications Commission; former Commissioner for Youths and Sports in Lagos State, Segun Dawodu; Lanre Babalola, former Chief of Staff to Governor Fashola, among other party leaders.