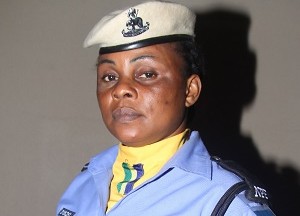 Two armed robbers who attempted to attack a woman police and her friend at the Egbeda/Shasha area by Tawakalitu Close, Orisunmibare Road, Lagos State got more than they bargained for.
The Woman Police, Sergeant Mercy John, not only showed that she is a taekwondo expert, but ended up disarming and arresting one of the robbers, while the second fled in shock.

John angrily snatched their gun from them when she and her friend were asked to lie face down, engaged them in fisticuffs and ended up smashing the head of one of them against the wall.
The second robber fled when he realised they had waylaid and attempted to rob the wrong persons that night.
The robbers had apparently chosen John and her friend as preys to be attacked because they were women.
They were unaware that she was seasoned woman police.
The robbers, who were on motorbike, were said to have accosted the women on February 10 by Tawakalitu Close, Orisunmibare Road, Egbeda/Shasha and pointing a gun at them, ordered they should calmly hand over their hand bags.
John’s friend, petrified out of her wits, quickly handed over her bag, but John refused. Before the robbers knew what was happening, she had struggled and taken possession of their gun.
This was even as she displayed her taekwondo experience.
The Police Public Relations Officer for Lagos State, Kenneth Nwosu, who confirmed the incident, said: “On the point of the attacked, one of the men who accosted them brought out a locally made pistol to frighten them, but the sergeant, who is a noncommissioned officer, immediately on sighting the firearm, smartly and professionally grabbed the neck of the gun wielding hoodlum and hit his head on a nearby wall. The firearm fell down and she immediately grabbed it and the hoodlums sensing imminent danger fled for their lives.”
According to Nwosu, the firearm had been deposited with the Special Anti-Robbery Squad, while efforts were being made to apprehend the fleeing hoodlums.
“The Commissioner of Police Lagos State Police Command, CP C.K. Aderanti, immediately approved that the NCO be given the Commissioner of Police Commendation for this act of gallantry,” said Nwosu.
“The Commissioner of Police also briefed the Inspector General of Police, IGP Suleiman Abba, who immediately approved that the NCO be equally given the Inspector General of Police Commendation.”
Aderanti congratulated John for this uncommon act of bravery and urged her to keep it up.
He further enjoined all personnel of the Command to emulate the brave efforts of the Sergeant and in their best in the service to the Nation.
Aderanti concluded by stating that John is a shining example of the abilities of the womenfolk.