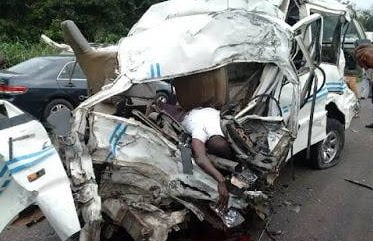 The Ogun Traffic Compliance and Enforcement Corps (TRACE) on Tuesday confirmed the death of a woman in an accident that involved a commercial bus on Lagos-Abeokuta Expressway.

Four others sustained varying degrees of injury in the lone accident which occurred at Dalemo Junction.

Adekunle Ajibade, the Sango-Ota Area Commander of TRACE, told the News Agency of Nigeria in Ota, Ogun, that the accident happened at about 11.00 a.m.

Ajibade said it occurred when a commercial yellow bus with registration number MUS 886 XE, heading toward Toll-Gate from Sango-Ota, lost control due to brake failure.

He said that the bus crossed to the other side of the road, where it hit the gate of Ascon Petrol Station, beside Zenith Bank Plc.

The TRACE commander said that 11 people were involved in the lone accident, which led to the death of the woman and injury of four others.

“The corpse of the victim has been taken to Ifo General Hospital morgue, while the four survivors are receiving treatment at Leadway Hospital, Ota,” he said.

Ajibade said that the vehicle had been towed off the road with the assistance of TRACE personnel, Federal Road Safety Corps (FRSC) and the police, to ease the flow of traffic in the area.

The TRACE official advised motorists to ensure that their vehicles were properly maintained before putting them on the road to avoid unnecessary loss of lives and property.