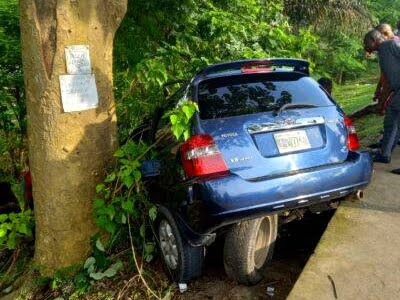 A yet-to-be identified woman has reportedly died in an auto crash in Calabar, Cross River State while chasing her husband who she saw with another woman at a shopping mall.

This development was revealed on Instagram by Stephen Okposin and confirmed by the Federal Road Safety Corps.

According to Okposin, the accident occurred along Murtarla Mohammed Highway, Calabar on Sunday.

The Instagram user wrote: “The lady saw her hubby at Spar shop with another woman in the car, so she hurriedly drove to double cross them.

“This man saw her car and zoomed off, so the woman became aggressive and sped up.

“I was just driving behind them just in less than 3 minutes I saw her involved in the accident and she’s unconscious at point of death.

“The hubby that was running suddenly dropped off the lady who was with him and rushed down to to assist revive her from the car.

“She’s been rushed to the hospital.

“We pray she survives it.”

Then shortly after, Okposin gave an update that the woman had died.

He said: “Quite a pity that she has given up…

“May her soul Rest In Peace.”

Confirming the incident to Vanguard News, the Sector Commander, of the FRSC in Cross River State, Maikano Hassan, said the incident was caused by overspeeding.

Hassan said the accident, involving a Toyota Highlander, claimed the life of the lone female driver who veered off the road into a ditch by the road.

He said: “Though the woman was immediately rushed to a nearby hospital, but she was said to have died few minutes later due to the injury sustained from the incident.”