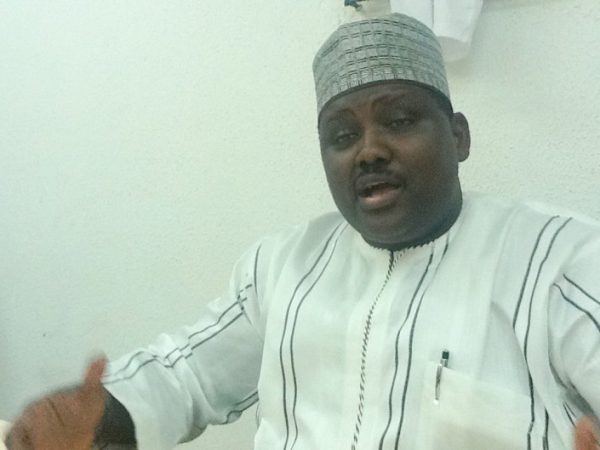 The trial of Abdulrasheed Maina and his son, Faisal, continued on Monday before Justice Okon Abang of the Federal High Court, Abuja.
Maina, former Chairman, Pension Reform Task Team, is being prosecuted by the  Economic and Financial Crimes Commission on a 12-count charge of operating fictitious bank accounts, corruption, fraud and money laundering, while his son faces a three-counts of money laundering, corruption and lack of full disclosure of asset.
At Monday’s hearing, prosecution witness 2, Mohammed Goje, told the court that Faisal Maina’s name appeared in huge money transactions, purchase of properties, company shares, and as part owner of Common Inputs Property Limited.
Also that the same name appeared in a company owned by Maina as the second highest shareholder with 2,000,000 ordinary shares, while in another company, the junior Maina has 800 ordinary shares.
He further revealed that same name featured in some documents that authorized withdrawals of huge amounts of money.
The witness, an investigator with the EFCC, revealed that between the month of July and August 2019, a total withdrawal of N58,111,585.02 were made by Faisal, as captured in Exhibit B.
The prosecution witness equally disclosed that while the defendant in his asset declaration form indicated ownership of only a five-bedroom semi-detached duplex located at Kado Estate, Abuja, investigations revealed that he owns properties in Kaduna, in Biu Local Government Area (Borno State) and another in Life Camp, Abuja.
He further disclosed that there were also companies he has huge interests which he did not disclose in the EFCC asset declaration form.
Prosecution counsel, M.S. Abubakar, tendered documents that included the defendant’s asset declaration form, volunteered statement, which was signed on October 3, 4, 6 and 10, Corporate Affairs Commission registration forms, and letter from the Department of State Services and they were admitted by the court in evidence.
The trial also progressed with the cross-examination of a prosecution witness, Fatimah Abdullahi, who is Maina’s sister, by defence counsel, Francis Oransanye.
The witness stated that she was not aware of the huge school fees her son was paying  at a Turkish university, Istanbul, totalling N3 million per semester, allegedly being paid by Maina.
She also denied knowing that another of her son, currently in Canadian University, Dubai, also pays over N700,000 per month.
She however, admitted having a five-bedroom apartment in Gwarimpa, Abuja and other properties in Kaduna State, but claimed ignorance of the worth of the property on CC7 Ramat Road, Kaduna, owned by her husband, put at over N300 million.
She also denied knowledge of the worth of the property she occupies with her family, also in Kaduna, put at over N200 million.
She, however, alluded that Maina tricked her into releasing her bank verification number to him.
“He (Maina) sent two of my cousins to take me to bank to change the signatory. When I asked why, he told me that there was no need, since he was changing the account name and that was how I gave out my BVN,” Abdullahi said.
She claimed not to be aware that her two bank accounts were linked to Common Inputs Property Limited, a company allegedly used by Maina to launder huge sums of money.
Furthermore, she said she never knew Maina with any other business apart from civil service job.
Justice Abang adjourned the cross-examination of the witnesses in both cases until December 17, 2019.