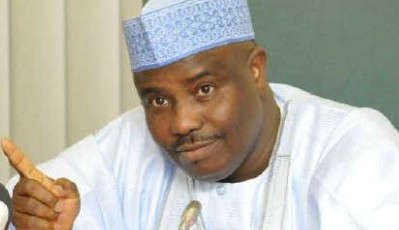 A Federal High Court sitting in Abuja on Monday struck out one of the suits filed by the Speaker of the House of Representatives, Aminu Tambuwal, challenging the constitutionality of the withdrawal of his security aides by the police authorities.
The suit was filed against the Attorney General of the Federation and Minister of Justice and the Inspector General of Police.
Prior to Monday’s sitting of the court, Dr. Tunji Abayomi, counsel to the Speaker, had filed for withdrawal of the suit.
In his submission, counsel to defendants in the suit, Ade Okeaya-Inne (SAN), did not oppose the application.
However, Okeaya-Inne prayed the court for an order of dismissal on the ground that they have filed a response to the application and to make an order as to cost.
Justice Mohammed in his ruling held that the defendants have only responded to the interlocutory application and not the substantive one.
Furthermore, the Judge held that the implication was that the defendants have not yet joined issue with the plaintiff.
On that ground, Justice A. Mohammed struck out the suit with no order as to cost.
Meanwhile, the court has fixed November 27 for hearing of the motion for joinder and amended originating summons filed by Tambuwal, seeking to stop the House of Representatives from removing him as the Speaker.
In the application to amend the originating summons, Lateef Fagbemi (SAN), counsel to Tambuwal, is praying the court to determine whether the Attorney General and the Inspector General of Police are empowered to interpret the constitution to the effect of withdrawing his aides.
Fagbemi is leading about seven other SANs and 65 lawyers to argue the case.