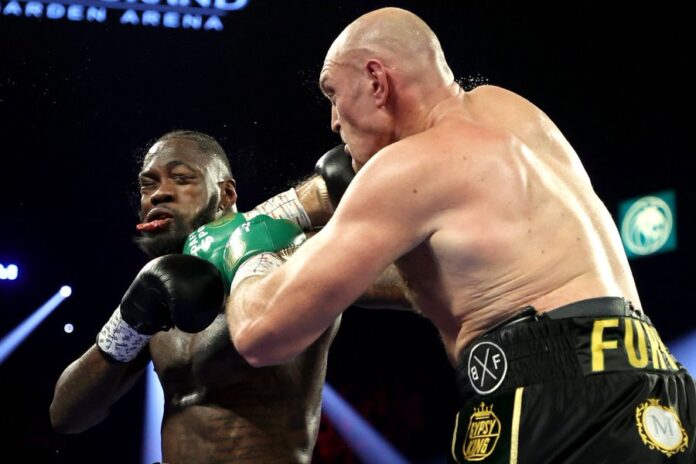 Deontay Wilder will sack his trainer Mark Breland after being left angered that he had thrown the towel in in a knockout defeat to Tyson Fury.
Wilder’s corner threw in the towel in the seventh round of the Las Vegas showpiece and it was viewed as a sensible call after the Alabama fighter had been dropped twice earlier in the fight.
But Wilder, and head trainer Jay Deas, spoke after the defeat that they did not agree with the move and the heavyweight is now ready to shake-up his team as a consequence.
Wilder has revealed he will activate his rematch clause option for a trilogy fight and he will go into that fight with a new trainer.
Speaking to Yahoo, Wilder said: “I am upset with Mark for the simple fact that we’ve talked about this many times and it’s not emotional.
“It is not an emotional thing, it’s a principle thing. We’ve talked about this situation many, many years before this even happened.
“I said as a warrior, as a champion, as a leader, as a ruler, I want to go out on my shield.
“If I’m talking about going in and killing a man, I respect the same way.
“I abide by the same principal of receiving.
“So I told my team to never, ever, no matter what it may look like, to never throw the towel in with me because I’m a special kind.
“I still had five rounds left.
“No matter what it looked like, I was still in the fight.”
Former US fighter Andre Ward was among those defending Breland’s call to end the fight early.
Ward tweeted: “I respect Mark Breland.
“We need more trainers like him in the sport of boxing.
“I stand with you Coach.”
Wilder produced a disappointing display as he was roundly beaten by Fury and he has since blamed the referee and his own ringwalk costume for his lacklustre display.
The American wore a black and red armoured body suit with a matching mask and crown, weighing a total of 40lbs, as he made his way to the squared circle for his second bout with Fury at the MGM Grand in Las Vegas on Saturday.
While there had been some talk of a unification bout for Fury with Anthony Joshua, it appears the focus will now be a third installment of Wilder-Fury.
“The rematch is definitely going to happen,” Wilder added to The Athletic. “We’re going to get it on. I want to get right back to it.”
Fury, as the winner of the second bout, would be entitled to a 60/40 percentage split of all the money on the line for the fight, plus the earnings from PPV and ticket sales.