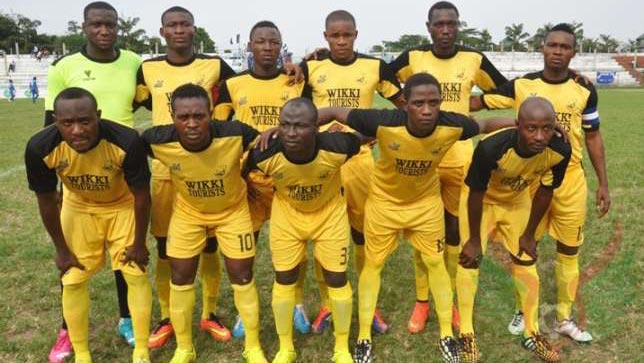 The management of Wikki Tourists Football Club of Bauchi on Tuesday removed the Technical Adviser of the club, Garba Ibrahim.
The News Agency of Nigeria reports that Ibrahim was sacked following the poor performance by the team in the ongoing National Professional Football League where it lost all its home and away matches.
Ibrahim took over as Technical Adviser following the resignation of his predecessor, Aliyu Zubairu.
A statement signed by the spokesman of the club, Nasiru Kobi, said a former Technical Adviser of Eyimba FC, Usman Shariff, has been appointed to replace Ibrahim.
Kobi said that Ibrahim, a former Chief Coach of the club, who took over the affairs of the team at the beginning of the season, had been redeployed to the Bauchi State Sports Council.
He, further, said that Haruna Abubakar and Dantani Yahaya were also appointed as goalkeeper trainer and assistant goalkeeper trainer respectively.
Kobi also said that the club’s chief coach, Bashir Sale, and trainer, Wada Jibrin, have also been redeployed to the state council.
He said: “Bala Mohammed, the club’s goalkeeper trainer, who is a contract staff of the club, has been disengaged by the club.
“All the appointments are with immediate effect while the new technical adviser was expected to commence training with the team on Tuesday.”
In a related development, the club, in its bid to strengthen its squad, has dropped five of its players.
Kobi said the action was to meet the transfer window guidelines of NPFL 2020.
He listed Ahmed Alamari, Wisdom Jumbo, Kamaldeen Sikiru, Sixtus Bobga and Adamu Mohammed as the players dropped by the club.
Kobi said that Aliyu Newman, Aminu Nuhu, Giwa Isaac, Salisu Musa and Yusuf Abdullahi were also dropped by the club in the last two weeks.
The spokesman disclosed that the club was negotiating with eight new players that would join the squad before the end of the week.