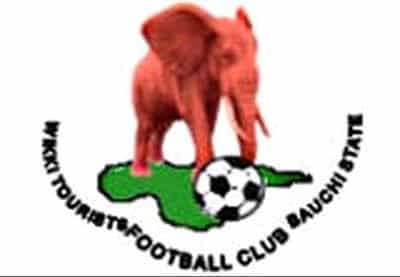 Wikki Tourists FC of Bauchi has retained 24 players who participated in the 2016 Nigeria Professional Football League and recruited 10.
The club’s Media Officer, Nasiru Kobi, made the disclosure on Friday in Bauchi in an interview with the News Agency of Nigeria.
The club also engaged Baba Gana-Naru as Technical Adviser following the exit of the former adviser, Abdul Maikaba, and employed Bwasit Mangut as its chief coach.
NAN reports that Wikki was third on the 2016 NPFL log after Rangers International of Enugu and Rivers United who were first and second in the competition respectively.
Kobi named Omo John (Heartland), Zikiye Jonathan (Kano Pillars), Richard Jonathan (FC Heart Abuja), Chinedu Onyenobu (Ikorudu Utd), Dadi Johnn (Plateau Utd), and Nnaameka Anyawu (Heartland) as some of the newly engaged players.
Others according to him are Bature Yaro (Nasarawa Utd), Chinedu Iroko (Heartland), Ezikiel Thompson (Warri Wolves) and Sadiq AbubaKar (Golden Sports Academy, Jos).
He also disclosed that the club had dropped five of its former players, while two others left on their own.
Kobi, who is also the State Chairman, Sports Writers Association of Nigeria, Bauchi State Chapter, said the club also promoted six other players from its feeder team to the senior to prosecute the 2016/2017 season.
He explained that the new players were engaged to fortify the club to win the league this season.
According to him, the management is ready to work with stakeholders, particularly the media with the aim of projecting the good image of the team and Bauchi State in general.
The spokesman solicited for the support of the members of SWAN through giving positive contributions toward the success of the club.
NAN.