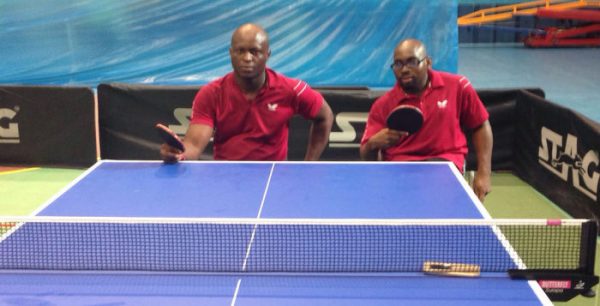 Ahmed Koleosho, one of Nigeria’s Paralympians to the Tokyo 2020 Games, has explained what led to Team Nigeria not winning a medal in the singles events of para-table tennis.

Koleosho spoke in an interview with the News Agency of Nigeria in Lagos weeks after the end of the Paralympics.

He said he and his teammates did not get to the podium because of their respective event’s technicalities.

He said: “It was not out of our inability.

“Also, it was not that the opponents we faced at the Games were of superior abilities.”

NAN reports that Koleosho and his partner, Isau Ogunkunle, failed in their bid to reach the semi-finals of the team event when they lost to a French duo in the quarterfinals.

The Nigerian duo lost 0-2 to the French pair of Florian Merrien and Nicolas Savant in the men’s team Class 4 to 5 event.

They had earlier lost 1-2 to the Argentine pair of Gabriel Copola and Mauro Depergola in the same event.

Koleosho, a 35-year-old Law graduate, said Team Nigeria to the Paralympics gave their all in Tokyo and achieved emphatic victory over top-rated stars, especially in table tennis.

He however pointed out that the facilities used during the Games hindered their further progress.

“It was a great experience for me and my performance was better than that of Rio 2016.

“I was close to getting on the medals table at the Paralympics before I lost, and I think God just wanted it to go that way.”

Koleosho however noted that he needed to go back to the drawing board to make necessary adjustments.

He said: “One thing is sure: we (para-athletes) need more support to help us improve in our events.

“This will help a great deal in mastering the technicalities.”

The Paralympian expressed his gratitude to the Lagos State Governor, Babajide Sanwo-Olu, for his intervention before the Games.

“But we need more of this kind of support to keep us in shape,” Koleosho, who captained Team Lagos at the 2020 National Sports Festival in Benin, said.

The para-athlete also pointed out that some of the technicalities which gave their Tokyo 2020 opponents advantage were in the number of competitions their foreign counterparts attended.

He added: “The opponents at the Paralympics were not better than us in terms of skills as we are able to match them.

“The only edge was that they have got accustomed to the facilities.

“I realised during the Paralympics that those top-rated players are not so special as the edge only came from the number of competitions they have attended.

“In para-table tennis calendar, we have international competitions ranging from 20 to 25, while these top-rated athletes can attend as many as 15 of them, while we may not attend one.

“So, comparing their exposure to competitions, we are lagging behind because in racket sports, we need to constantly engage ourselves to improve.”

Koleosho added that the facilities used during the Paralympics were different from the ones the Nigerian athletes were familiar with, saying this was another reason for under-performances.

He said: “The tables used during the Paralympics kept changing, especially in terms of speed.

“So, we needed to familiarise ourselves with the tables and study the movements.

“Also, the flooring and the lighting around the table tennis courts, all had a lot of effect on our performances and they formed the technicalities I am referring to.

“If I get the opportunity to play constantly on these facilities, then I should be able to beat them.

“To drive this point further, that we can match them, everybody can see that I was able to beat top-ranked players.

“I was able to defeat world-ranked numbers five and 10 during the Paralympics.

“So, their rankings are based on the number of competitions they attended, which gave them points.”

Koleosho appealed for more support for para-athletes to attend international competitions which would further expose them to the technicalities and improved their rankings.

He pleaded: “We need competitions to get more points for rankings and also expose us to the technicalities of the game.

“We are appealing for more sponsors to help us achieve the aim of bringing glory to the country.

“We need this support now so that we can be fully prepared for the 2024 Paralympics in Paris.”