Why we banned use of public schools for social activities – Edo 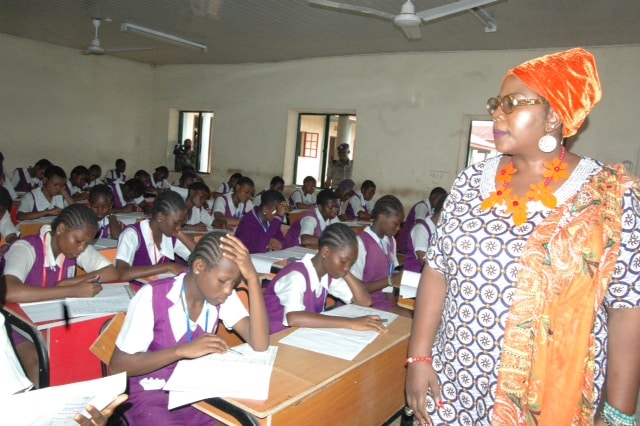 Share
Facebook Twitter LinkedIn Pinterest Email
The Special Adviser to Governor Godwin Obaseki of Edo State on Basic Education, Dr. Joan Osa Oviawe, has explained that the recent ban by the State Government on the use of premises of public schools for social activities would check vandalism of government infrastructure.
Oviawe gave the explanation during an inspection tour of some public schools where students are currently writing the Junior Secondary School Certificate Examination in the state.
Oviawe said the ban would create an effective line of communication and strengthen the harmonious relationship between schools and communities where they are located.
“With such a measure in place, communities will take over ownership of the infrastructure as critical stakeholders and put the problem of vandalism behind them,” she stressed.
She added that the conduct of the examination has been peaceful and orderly without disruptions at the centres visited by her team.
She said: “I want to commend the authorities of the various schools we have visited for the orderly manner the examinations are being conducted.
“There are some challenges that are surmountable and we will improve on the entire process after critically reviewing the findings of our visits.”
Speaking to newsmen on the tour, the Principal of Oredo Girls Secondary School, Patience Onwodi, said it was timely and would strengthen the education system and create an avenue for constructive review of developments in the sector if it is done regularly.
Onwodi noted that the Junior Secondary examination so far has been peaceful without any form of disruption in her school and called on the government to help renovate a dilapidated structure in the school premises to provide more classrooms for students.
The Principal of Uselu Secondary School, Nosa-Ehigie Adesua, called on the state government to intervene in the land grabbing activities of developers, the host community and a church.
Oviawe and her team visited schools in Egor, Oredo and Ikpoba-Okha local government areas of the state.
The schools visited included Imaguero College, Oredo Girls, Niger College, St. Maria Goretti and Edo Boys.
Dr. Joan Osa Oviawe Edo State Governor Obaseki public schools
Share. Facebook Twitter Pinterest LinkedIn Tumblr Email