Why Royal Family doesn’t want my son to be a prince — Meghan, Prince Harry’s wife 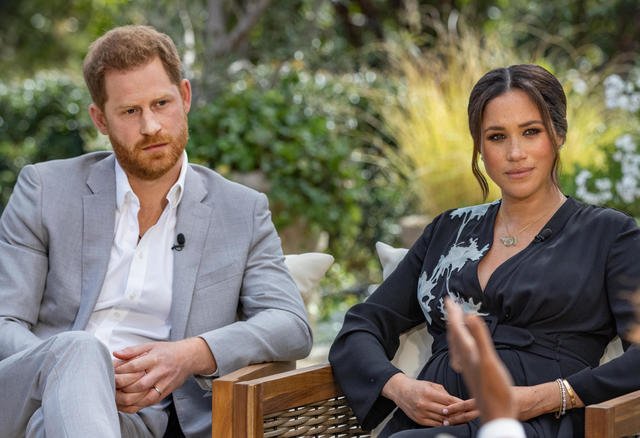 Prince Harry and Meghan Markle on Sunday granted an interview to Oprah Winfrey in which they made a lot of revelations about how they were treated by the Royal Family in the United Kingdom in the days before they had their son, Archie.

During the interview, the Duke and Duchess of Sussex detailed their struggles as working royals.

Meghan revealed that “concerns and conversations about how dark his skin might be when he’s born” were brought up to her husband ahead of her son’s birth.

Meghan claimed the Royal Family did not want her son to be a prince or offer him security.

Asked why by Oprah, she said it had to do with how dark his skin might be when he’s born.

Oprah asked if her son being “too brown” would be a problem, Meghan replied: “If that is the assumption you are making, that is a pretty safe one.”

Oprah was shocked and asked Meghan who raised these questions, but she refused to say because it would be “very damaging to them”.

Meghan added: “That was relayed to me from Harry, those were conversations the family had with him, and I think it was really hard to be able to see those as compartmentalised conversations.”

Harry also said it “hurt” that his family did not speak out against articles “with colonial undertones” written about his wife.

Megan disclosed that she contemplated suicide while in the royal family and she had asked officials at Buckingham Palace for medical help, but was told it would damage the institution.

Meghan said: “I was ashamed to have to admit it to Harry. I knew that if I didn’t say it, I would do it.”

Meghan admitted to Oprah that she would have committed suicide and since the royal family won’t help her, she turned to a friend of Princess Diana’s for help.

She said she struggled with her mental health due to the intense pressures of being in the Royal Family, and that she had suicidal thoughts.

“I just didn’t want to be alive any more,” she said.

“And that was a very clear and real and frightening constant thought. And I remember, I remember how [Harry] just cradled me and I was… I went to the institution, and I said that I needed to go somewhere to get help.

“I said that I’ve never felt this way before and I need to go somewhere. And I was told that I couldn’t, that it wouldn’t be good for the institution.”

She said Harry was there for her and constantly held her tightly whenever they were in the public to reassure her.

Meghan also revealed she is “haunted” by a photograph of herself at a red carpet event at the Royal Albert Hall in January 2019, which the couple attended just after she had the conversation with Harry.

“A friend said: ‘I know you don’t look at pictures, but oh my god, you guys look so great,’ and sent it to me,” the duchess said. “I zoomed in and what I saw was the truth of what that moment was, because right before we had to leave for that, I had just had that conversation with Harry that morning.”

Meghan said Harry suggested she did not attend the event, but that she did not want to be left alone.

“And we went. And that picture, if you zoom in, what I see is how tightly his knuckles are gripped around me. You can see the whites of our knuckles because we are smiling and doing our job, but we are both just trying to hold on.

“Every time those lights went down in that royal box, I was just weeping.

“[Harry] was gripping my hand and it was: ‘Okay an intermission’s coming, the lights are about to come on, everyone’s looking at us again’ … and you had to just be ‘on’ again.

“You have no idea what’s going on for someone behind closed doors. You’ve no idea. Even the people that smile the biggest smiles and shine the brightest lights, it seems.”

Meghan Markle accused the royal family of keeping silent while the press twisted stories about them and distorted the truth.

Meghan went on to explain that royal family members allegedly said they wanted “to change the convention” of royal titles specifically for Archie.

“They didn’t want him to be a prince or princess … which would be different from protocol and that he wasn’t going to receive security,” Meghan said. “It was really hard. … This went on for the last few months of our pregnancy. … I was very scared of having to offer up our baby, knowing that they weren’t going to be kept safe.”

She said that her thought at the time was: “He needs to be safe, so we’re not saying don’t make him a prince or princess, whatever it’s going to be. … We haven’t created this monster machine around us in terms of clickbait and tabloid fodder. You’ve allowed that to happen, which means our son needs to be safe.”

Meghan said there was “no explanation” given about the lack of royal title for her son.

She continued: “I heard a lot of it through Harry and parts of it through conversations with family members. It was a decision that they felt was appropriate.”

She added that though she understands the pain of being a working member of the royal family, a royal title was her son’s birthright and the decision to go without it was his to make.

“It’s not their right to take it away,” she added.

Oprah further asked her about the fact that she and Harry didn’t pose for the traditional picture with their child after she gave birth and she replied that they weren’t asked to pose for the photo.

She added that when they were called out for it, the royal family kept silent.

“That’s also part of the spin that was really damaging,” Meghan recalled. “I thought: ‘Can you just tell them the truth? Can you tell the world you’re not giving him a title, and we want to keep him safe?”

Meghan also addressed race within the royal family and how the treatment she said she saw of Archie confused her.

She told Oprah: “Growing up as a little girl of color, I know how you want to see someone who looks like you in certain positions. I could never understand how it wouldn’t be seen as an added benefit and a reflection of the world.”

Oprah also asked Prince Harry about their son’s skin tone and Harry said: “That conversation I am never going to share, but at the time it was awkward and I was a bit shocked.”

When asked if he would reveal what the question was, he responded:”No. I’m not comfortable sharing that. But that was right at the beginning… what will the kids look like?”

“The reverse happened,” Meghan told her.

Meghan later added that Kate had “really hurt my feelings” a few days before the wedding, but that she had apologized and is “a good person”.

She said It was not a “confrontation” and it would not be “fair” to Kate to go into detail.

But she added that it was “hard to get over” being blamed for something she did not do.

“Everyone in the institution knew that wasn’t true,” she continued, and said she hoped Kate “would have wanted that to be corrected”.

Asked if she thinks there was a separate standard for her and Kate, and if so why, Meghan said: “I don’t know why. I can see now what layers were at play there.

“And again they really seemed to want a narrative of a hero and a villain.”

Prince Harry also revealed that his family cut him off when he stepped down as a working member of the royal family and he had to rely on the inheritance his mum, Princess Diana left him.

He said: “My family literally cut me off financially. And I had to afford security for us.”

He explained that he was cut off in the first quarter of 2020.

He continued: “But, I’ve got what my mum left me and without that, we would not have been able to do this.”

Asked by Oprah why they chose to step down from their roles as senior royals, Harry said: “Lack of support. And lack of understanding.”

Harry denied that he “blindsided” the Queen with the news, saying he has “too much respect” for his grandmother, and said they have a good relationship.

However, he said that his father, Prince Charles, had “stopped taking my calls” at one point when he left the UK.

Asked about the “tipping point” which led to the couple leaving, Harry said he was “desperate”.

He continued: “I went to all the places which I thought I should go to, to ask for help – we both did, separately and together.”

Oprah asked: “You left because you were asking for help, and didn’t get it?”

Harry told Winfrey he feels “really let down” by his father, the Prince of Wales, “because he’s been through something similar, he knows what pain feels like, [and] Archie’s his grandson.

“But at the same time – I will always love him – but there’s a lot of hurt that’s happened and I will continue to make it one of my priorities to try and heal that relationship.

“But they only know what they know, or what they’re told.”

Asked whether he would have stepped down from his role if not for Meghan, Harry said: “No.”

Oprah pushed Harry to explain, to which he replied: “Trapped within the system, like the rest of my family are. My father and my brother, they are trapped. They don’t get to leave.”

Harry said he has “huge compassion” for his father and brother’s circumstances.

Asked by Oprah what his mother, Diana, would say if she was alive, Harry said: “I think she would feel very angry with how this has panned out, and very sad.”

Speaking about his relationship with his brother, William, Harry said that at the moment it is “space”.