Why oil theft persists in the Niger Delta – Navy Commander 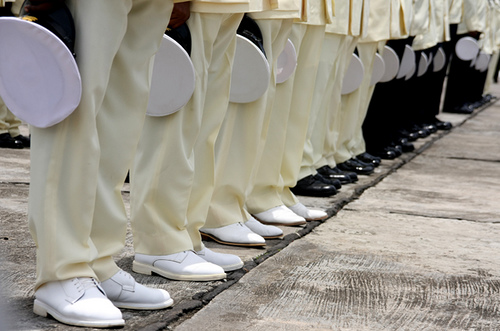 Share
Facebook Twitter LinkedIn Pinterest Email
Commodore Aliyu Sule, Commander of the Nigerian Navy Ship Delta, has identified impunity and slow pace of adjudication as factors responsible for the persistence of illegal bunkering in the Niger Delta region.
Sule stated this in an interview with the News Agency of Nigeria on Saturday in Warri.
He said the process of trial of arrested suspects for oil theft was slow, which encouraged the perpetrators to easily go back into the illicit act.
According to him, the cases of more than five ships apprehended by his command over stolen oil since 2005 were yet to be resolved in the courts.
He said: “It takes a longer time for justice to be done in matters of oil theft that is why the illicit business persists.
“So suspects should be tried almost immediately and jailed.”
Sule stressed the need for effective surveillance and speedy trial of oil thieves, saying these were germane in eradicating illegal bunkering in the region.
He disclosed that his command had adopted a constant and effective surveillance of the hinterland from both land and air with a view to adequately comb the terrains.
He noted that the approach was yielding positive result.
“We will continue to go after them until they desist from it,” he said.
NAN recalls that Sule, who assumed leadership of the NNS Delta in April, had destroyed 28 illegal refineries and over 2,700 metric tons of crude oil in less than three months.
The exercise was carried out in three separate operations between June and August in Warri South and Warri South-West Local Government Areas of Delta State.
Sule said that in the recent operation in Kantu forest on August 13 in Warri South-West, nine illegal refineries and over 700 metric tons of crude oil were destroyed.
He said three generating sets and five portable pumping machines were recovered in the raid.
NAN reports that it was the second time Kantu forest would be invaded by the naval personnel to destroyed illegal refineries in three weeks.
“Again, my men raided Kantu forest and destroyed nine illegal refineries and about 700 metric tons of crude oil over a large expanse of land,” he said.
The Commander said the determination of the Navy to combat illegal oil deal was in line with the Chief of Naval Staff’s zero tolerance on crude oil theft and other illegalities in the waterways.
The commander also warned the perpetrators against the consequences of their action warning that whoever is caught would face the full weight of the law.
NAN.
Oil theft
Share. Facebook Twitter Pinterest LinkedIn Tumblr Telegram Email