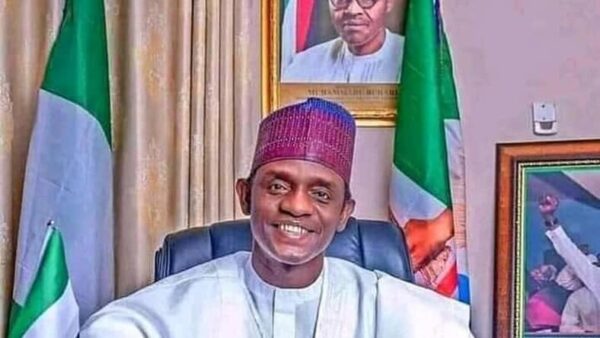 Share
Facebook Twitter LinkedIn Pinterest Email
Legal practitioner, Kayode Ajulo, has called on the Yobe State governor and interim chairman of the All Progressives Congress, Mai Mala-Buni, to vacate his seat as the chairman of the party.
Ajulo said his call was based on the pronouncement of the Supreme Court on the Ondo State governorship election on Wednesday.
The Supreme Court, on Wednesday, upheld the election victory of Governor Rotimi Akeredolu of Ondo State.
The apex court, in a split decision of four-to-three, dismissed the appeal that was brought before it by the candidate of the Peoples Democratic Party, in the governorship election that held in the state on October 10, 2020, Eyitayo Jegede, SAN.
Ajulo said the national chairman and national secretary are the soul of any party, as they are saddled with the day-to-day running of the party.
He said he believed that the continuous stay of Mala-Buni as the chief executive officer of APC runs contrary to the provision of the Constitution, and as such may be an albatross on the party  soon, “as all he had done before would be null and void, including nomination of candidates within the period of his so-called leadership of the party.”
apc Governor Rotimi Akeredolu Kayode Ajulo Mai Mala Buni PDP
Share. Facebook Twitter Pinterest LinkedIn Tumblr Email