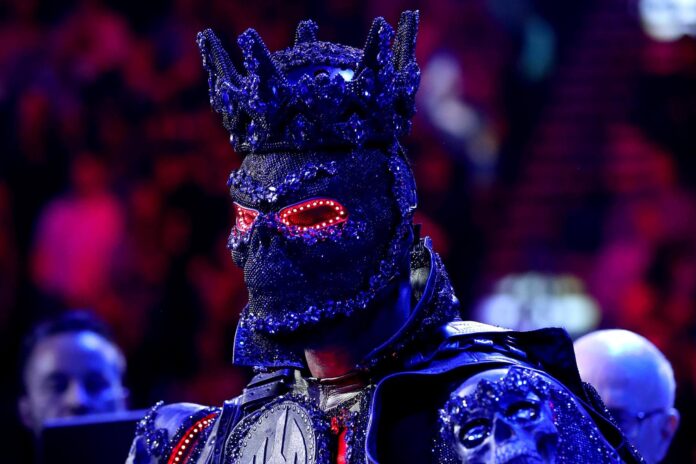 Deontay Wilder has blamed his elaborate ringwalk outfit for his TKO defeat to Tyson Fury.
Wilder, 34, suffered the first defeat of his professional career to Fury with ‘The Gypsy King’ dominating their WBC heavyweight championship contest before the towel was mercifully thrown in the seventh round.
As part of an impressive set of ringwalks for both fighters, the American wore a costume made up of full body amour, a mask and a crown with LED lights around his eyes and chest, which weighed at least 40lbs.
Speaking to Yahoo Sport, Wilder explained the outfit was a tribute to Black History Month, but admitted the excessive weight meant he “didn’t have the legs” for the fight.
“He didn’t hurt me at all, but the simple fact is my uniform was way too heavy for me,” Wilder said. “I didn’t have no legs from the beginning of the fight. In the third round, my legs were just shot all the way through.
“But I’m a warrior and people know that I’m a warrior.
“A lot of people were telling me: ‘it looked like something was wrong with you.’ Something was, but when you’re in the ring you have to bluff a lot of things. I tried my best to do so. I knew I didn’t have the legs because of my uniform.”
Wilder also confirmed he plans to trigger a rematch clause that will trigger a trilogy fight with new WBC champion Fury.