Why I am against formation of Judges Association – CJN 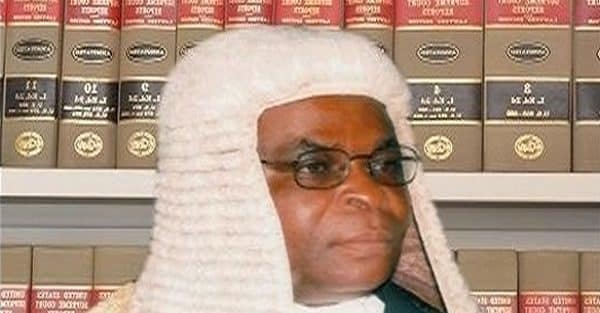 The Chief Justice of Nigeria, Justice Walter Onnoghen, says judges cannot form an association to speak for them when under attack because their mandate is adjudication, not advocacy.
Onnoghen said this on Wednesday in Abuja at the unveiling of Apex Quarterly Magazine, a maiden in-house publication of the Nigerian judiciary.
He recalled that during the 2017 All Nigeria Judges Conference, a judge from one of the Jurisdictions advocated for the formation of an Association of Nigerian Judges to speak for Judiciary when under attack.
He said: “This is like what the Nigeria Bar Association does for lawyers, since sitting judicial officers cannot grant media interviews.
“The judge’s position was that periodic press statements issued after the meetings of the National Judicial Council are too few and far between to make any impact.
“My obvious response, however, was an emphatic ‘No’, because the mandate of a judicial officer is adjudication and not advocacy.’’
He, however, expressed optimism that the publication being unveiled, would like all literature, chronicle events of the judiciary for posterity.
The CJN said the publication was a milestone achieved in the quest to improve public perception of the judiciary by the Nigerians.
Onnoghen said: “At assumption of office, I unveiled a reform agenda that would consolidate on the achievements of my predecessors to make the Nigerian judiciary one of the best in the world.
“One of the reform items was directed at improving the public perception of the judiciary.
“I consider the poor public perception of our arm of government a grave concern that requires special effort to correct by telling the world the true state of things in the judiciary.
“The Apex Quarterly Magazine is one, but certainly not the only step, taken to show the world what we do in the Judiciary.”
The CJN also noted that as part of efforts to cautiously open the Judiciary to the public, he had directed that all judgments and decisions of the court be uploaded on the website within seven days of delivery.
In a goodwill message, Justice Zainab Bulkachuwa, President, Court of Appeal; Justice Abdul Kafarati, Acting Chief Judge, Federal High Court; and Justice Babatunde Adejumo, President, National Industrial Court all applauded the initiative.
Other top functionaries in the judiciary also lauded the initiative and expressed confidence that it would give the public an insight to the workings of the judiciary.
The News Agency of Nigeria reports that the maiden edition of the magazine is 64-page and divided into sections covering different areas of the judiciary.