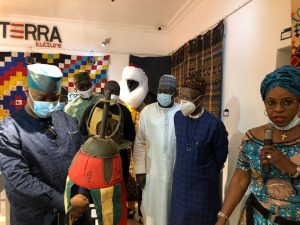 The Minister of Information and Culture, Alhaji Lai Mohammed, says in spite of annual revenue of about N2 trillion, the fashion industry in Nigeria is underrated due to lack of  adequate information about the sector.

The minister stated this on Sunday in Lagos when he declared open a fashion exhibition entitled: ‘Cycles of Fashion’.

The News Agency of Nigeria reports that the exhibition was organised in collaboration with the Federal Ministry of Information and Culture and Terra Kulture, a popular art, culture and lifestyle centre.

”The fashion industry is seriously underrated, especially in its capacity and ability to help advance the government’s economic diversification policy, as well as wealth and job creation.

“While we continue to focus on music and film, we tend to ignore or underrate the fashion industry.

“I guess this is because of the lack of
adequate information about the industry.

“That is about to change. As you are very much aware, we recently set up a post Covid-19 Initiative Committee on the Creative Industry.

“This committee, headed by Ali Baba, did a great job that has brought to the fore the huge potential of the creative industry,” he said.

Quoting from the report of the Ali Baba committee, the minister said the fashion industry’s annual revenue is around N2 trillion while the industry comprises about 1,000 businesses that employ over 30,000 practitioners.

He said the film and music industries  which are more celebrated, contribute an annual revenue of N140 billion and NN300 billion respectively.

“Now, if we add the hair and beauty Industry to the fashion industry – since they are natural allies, so to say – we have a mega industry that is worth N3.5 trillion annually.

“At N3.5 trillion, these two industries are almost equal or bigger than all the other industries put together.

“I am talking of hospitality, events and tourism; advertising, radio and television; writing, printing and publishing; comedy, dance and performing arts as well as arts, design and photography,” he said

The minister noted that fashion had always been a valuable part of the Nigerian culture, adding that its importance in the nation’s history cannot be ignored.

He said the exhibition would capture the rich contribution of fashion and dress code to national identity all through the years.

“It is meant to explore how our socio-cultural ways have influenced and continued to influence the forging of a national identity from the diverse cultures that make up Nigeria.

“This incredibly-immersive and colourful exhibition will take us on a historic, educative and informative journey of the people and tribes that make up Nigeria and their unique dress styles,” he said

Mohammed recalled that following the negative impact of the COVID-19 pandemic on the creative industry  in general, the Federal Government set up the Ali Baba Committee to mitigate the effects.

He said when the committee submitted its report, the government followed up by setting up an Implementation Committee headed by Otunba Olusegun Runsewe to design an implementation plan on immediate, short-term and long-term recommendations.

The minister disclosed that the Implementation Committee has concluded its work and would soon be submitting its report.

He commended workers of Terra Kulture led by  Bolanle Austen-Peters and wished them a successful exhibition.

Austen-Peters said the exhibition is a departure from the typical static exhibition template.

Austen-Peters said apart from showcasing the heritage, culture and tradition of the country, the exhibition would serve as a correctional medium for indecent dressing among youths.

The Managing Director of Ecobank Plc, Patrick Akinwutan, said the bank is supporting the exhibition to showcase the richness of African values, tradition and creativity.

He said Ecobank as a Pan-African bank, present in 36 African countries is committed to promoting the rich culture, values and tradition of the continent.

NAN reports that the Director-General of National Gallery of Arts, Ebeten Ivara, and his counterpart from National Commission for Museum and Monuments, Prof. Abba Tijani, were present at the event.